UN envoy sets next round of Syria talks on April 9

'We have to start focusing on political process,' UN envoy de Mistura says at end of first round of Syria talks in Geneva 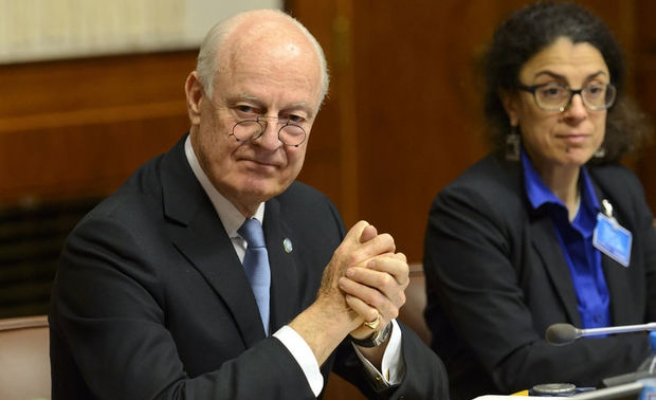 The UN Special Envoy for Syria, Staffan de Mistura, has said he plans to restart peace talks on April 9 with a focus on political transition despite the Bashar al-Assad regime’s request to resume talks after parliamentary elections on April 13.

Addressing a press conference at the end of talks in Geneva on Thursday, de Mistura said: "I am expecting and hoping... the next round of talks will not be focusing on principles again. We have had enough of that. There are many common valid points there, but we have to start focusing on the political process."

De Mistura handed a document at the last day of talks to the Syrian regime and opposition in Geneva, outlining basic principles for a political solution to the Syria crisis.

The UN envoy said that neither the regime delegation nor the opposition delegation have refused this document.

"The participants in the intra-Syrian talks agree with the special envoy that the full implementation of UNSC Resolution 2254, the ISSG [International Syria Support Group] statements and the Geneva Communique in its entirety are the basis for a political transition process and beyond that will end the crisis in Syria -- a crisis that has cost countless lives and imposed endless suffering on the people of Syria," the document read.

"The sides confirm that a political settlement is the only way to peace. Towards this end, the parties recognize the following essential principles as the foundation for a future Syrian state that meets the aspirations of the Syrian people," it stated.

The 12 points consisted of respect for the sovereignty, independence, unity and territorial integrity; the principles of sovereign equality and non-intervention; a democratic, non-sectarian state based on citizenship and political pluralism, diversity and the contributions and values of all religions.

The document also noted women's equality of rights and representation at a level of at least 30 percent during the transition and thereafter; the political transition mechanisms for credible, inclusive and non-sectarian governance; an environment of stability and calm during the transition; continuity and reform of state institutions and public services; along with measures to protect the public infrastructure and private property.

It also rejected terrorism and strongly opposes terrorist organizations, committing to rebuilding a strong and unified national army. There shall be reparations, redress, care, and restitution of rights and property lost for those who have suffered loss or injury in consequence of the conflict.

Syrian opposition said Thursday the basis has been set for "substantive" peace talks and political transition before the next round of talks in April.

"Out of these two weeks we come out with feeling that we have perhaps laid the basis for substantive talks in the next round. We have not had those substantive talks," Syrian opposition delegate Basma Kodmani said.

About the document handed out by de Mistura, Kodmani said: "We think that this paper is constructive."

He also said the sentencing of ex-Bosnian Serb leader Radovan Karadzic to 40 years in prison for war crimes, including genocide in the Srebrenica massacre, gave hope to Syrian opposition that someday Bashar al-Assad would meet the same fate.

"The trial of Radovan Karadzic certainly gives us hope. There is an international justice out there that will certainly seek to pursue to prosecute big criminals of Syria as well," he said.

The first round of peace talks in Geneva, which started on March 14, ended without any result Thursday.

Last month, Russia and the U.S. agreed over a cessation-of-hostilities agreement over Syria, which paved the way for talks to resume; however, it is only valid for two weeks, according to Syrian opposition.

Since taking effect, the Assad regime, backed by Russia and Lebanon’s Hezbollah group, has been accused of continued attacks in Syria from the air and on the ground. In June 2012, the Geneva conference on Syria had called for the formation of a transitional government, maintaining a cease-fire, release of prisoners and delivering humanitarian aid to besieged areas.

Syria has been locked in a vicious civil war since early 2011 when the Assad regime cracked down on pro-democracy protests with unexpected ferocity.