UN mediator Lakhdar Brahimi: Two parties seem to be willing to stay on and to talk, but the gap between them is quite large. 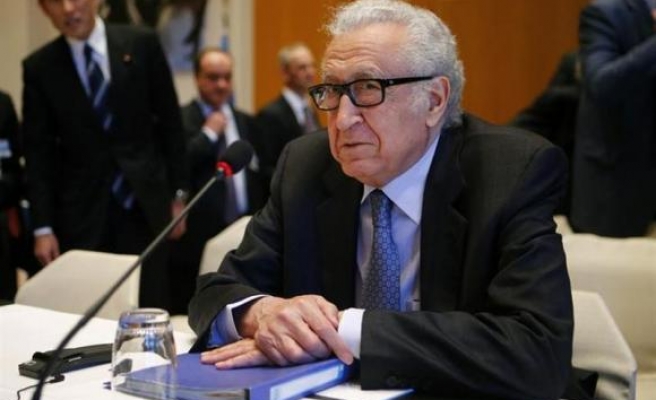 "We talked about the TGB [transitional governing body], as a very preliminary discussion," UN mediator, Lakhdar Brahimi said on Wednesday.

"We also tried to see what is happening over the humanitarian issues, in particular about Homs, where negotiations between the United Nations and the Syrian authorities are still ongoing," Brahimi added.

"We realize every day that the two parties seem to be willing to stay on and to talk, but the gap between them is quite large," added Brahimi.

Brahimi said, "I do not expect that we will achieve anything substantive. I am very happy that we are still talking, that the ice is breaking slowly, but it is breaking.

We will separate on Friday and discuss what we will do when we resume; I hope that the second session will be more structured and hopefully more productive than the first session.”

We still expect to finish this first session on Friday, and on Friday we’ll agree on the exact date when we will resume, most probably after about one week," he added.

Brahimi is the chief mediator between the Syria regime and the Syrian opposition, who are trying to negotiate a political solution to the longstanding conflict in Syria.

The international peace conference between the Syria regime and the Syria National Coalition is presently being held in Geneva, Switzerland, to try and find a political solution to end the conflict.

SNC's Safi: We must see progress in next 2 days

"We took an important step and began, for the first time, handling the issue of setting up a transitional government," he said.

Safi also said they talked to the regime about Geneva Communique issues.

The Syrian opposition's spokesperson said they felt the regime delegation was becoming more open to moving onto political negotiations.

"It seems the regime is ready to talk within the framework of the Geneva Communique, but want to change order of discussion. They also keep trying to put the 'transitional government' issue at the bottom of the agenda list and focus on issues regarding terrorism, instead," he noted.

"We have had a positive step forward, for the first time we are talking about the transitional governing body whose responsibility it is to end dictatorship, to move towards democracy, and to end the fighting and the misery in Syria. We hope for more progress in coming days," he said.

"We would like to see some pressure coming from the international community to stop this regime killing its own people. If we do not see any progress in the next two days, a meeting of UN Security Council would be in order and Mr. Brahimi would be ready to file a report to the UNSC," said Safi.

Safi added, "We would like the whole world to decide who is trying to block any progress or reconciliation for a change in Syria; moving from dictatorship to a democracy."

We are committed to these negotiations, but of course, at one point this kind of negotiation will have to stop if there is no progress and of course Brahimi has the responsibility of doing that," Safi added.

Syrian opposition spokesperson also noted that the upcoming talks would focus on size of transitional governing body and responsibilities.

"The talks have been positive today because they spoke about Geneva I," Saban said at a press conference on Wednesday morning.

"The only difference between us (the regime and the opposition) is that we want to discuss Geneva I, item by item. From the start, they’ve wanted to jump right to negotiations about being in power," Saban said.

Saban said Brahimi would have the group discuss terrorism as it is one of the most critical issues on the agenda.

The Syria regime is behind its agreed schedule, of January 31, to destroy its chemicals, said UN Secretary-General Ban Ki-moon, on Wednesday.

Pointing out that the chemical-disarmament efforts are proceeding too slowly in Syria, Ban called on the Syria regime to abide by its promise to the UN, by immedately sending the chemical materials to Latakia port to be loaded onto Danish and Norwegian cargo vessels.

Associate Spokesperson for the UN Secretary-General Farhan Haq said that Syria's Assad has failed to comply with the schedule set to destroy its most hazardous chemicals at sea.

According to the UN report, only some of Syria's chemical arsenal has been shipped out of the country.

Haq expressed the concerns of the UN Secretary-General over the healthy course of the process.

"While remaining aware of the challenging security situation inside the Syrian Arab Republic, it is the assessment of the joint mission that [Syria] has sufficient material and equipment to carry out multiple ground movements to ensure the expeditious removal of chemical-weapons material," Ban said.

"The delay is not insurmountable," said Ban, noting that the mid-year cutoff date 'is still five months away.'

Ban also said: "it is imperative that the Syrian Arab Republic now examine the situation, intensify its efforts to expedite in-country movements of chemical weapons material and continue to meet its obligations."

The second batch of chemical weapons materials was loaded onto ships on Monday and transported out of Syria for destruction following the first consignment on January 7, a UN spokesman said, quoting a report by the joint mission of the chemical weapons watchdog, Organization for the Prohibition of Chemical Weapons (OPCW) and the United Nations.