Seven U.N. cars were seen leaving a Damascus hotel on Monday morning, carrying some of the last members of a mission which at its height deployed 300 observers across the country. 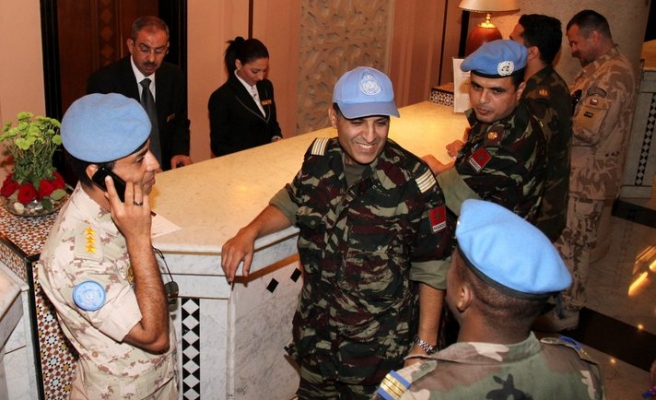 United Nations military observers left Damascus on Monday after a four-month mission in which they became helpless spectators of Syria's spiralling conflict, instead of monitoring a ceasefire between President Bashar al-Assad's forces and rebels.

Seven U.N. cars were seen leaving a Damascus hotel on Monday morning, carrying some of the last members of a mission which at its height deployed 300 observers across the country.

The unarmed monitors suspended operations in June after coming under fire and most have already left the country, leaving a small 'liaison office' in Damascus in case a chance for a political settlement to the bloodshed ever emerges.

"Our mission failed because the two sides did not abide by their commitments," one uniformed U.N. observer, who declined to be named, said at the Damascus hotel.

The mandate of the monitoring mission, known as UNSMIS, expired on Sunday night after diplomats at the United Nations said conditions for continuing operations had not been met. The last monitors are expected to be out of the country by Friday.

After a brief lull, violence intensified during the monitors' presence in Syria and at least 9,000 people have been killed since they arrived to oversee a ceasefire declared on April 12 by former U.N.-Arab League mediator Kofi Annan.

The truce never took hold. At least 18,000 people have now been killed in Syria since the anti-Assad revolt began. At least 170,000 people have fled the country, according to the United Nations, and 2.5 million need aid inside Syria.

Rebels seized control of districts in Damascus and Aleppo last month, as well as several border crossings and swathes of northern territory, before Assad's forces launched counter-offensives in the country's two main cities.

On Monday, Assad's troops backed by tanks tried to retake the Damascus suburb of Mouadamiya from opposition fighters.

According to an initial tally, at least three people had been killed and 20 wounded from tank shelling of the town, a southwestern extension of Damascus on the road to the Israeli-occupied Golan Heights, opposition activists said.

"The offensive began at 6.00 a.m. (0300 GMT). Tanks were dispatched from the al-Mezze airport base and Brigade 555 in Somarieh and have now almost surrounded Mouadamiya," Haya, an activist, said by phone, referring to two nearby military bases.

Syrian troops entered Mouadamiya at the end of last month after a two-day offensive that killed more than 120 people, according to residents and opposition activists.

But then, as in other areas around Damascus, rebels begin to reestablish control after the army pulled out to refocus its efforts elsewhere in and around the capital.