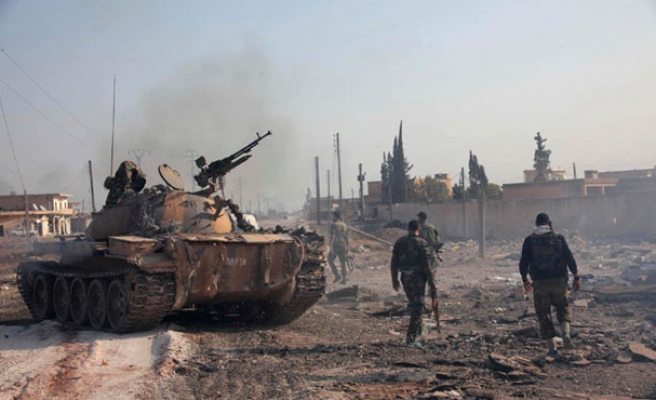 A United Nations plan for local ceasefires in Syria is deadlocked, with Damascus feeling it does not need to make concessions to disparate armed groups, Western diplomats familiar with the talks said.

Since October, U.N. Syria mediator Staffan de Mistura has been working on a plan to broker "local freezes", starting in the northern city of Aleppo, to alleviate fighting that has killed more than 200,000 people in four years; 2,700 of them in January alone, according to a monitoring group.

Both the United Nations and the government say talks continue but diplomats say there is no progress. "The freeze is frozen. It is just going from bad to worse," one said.

Syrian government officials could not be reached to comment on the ceasefire talks. A Lebanese analyst familiar with the Syrian government's thinking said Damascus felt the U.N. team had not paid enough attention to the threat of jihadists crossing into Syria.

De Mistura's difficult start illustrates how hard it is to advance any kind of diplomatic initiative in Syria. The government sees no immediate need to make a deal on the ground while the other side is not one but many factions.

Aleppo, Syria's second city, is at the heart of clashes between government forces and allied militia and a range of insurgents which include al Qaeda's Syria wing Nusra Front, foreign fighters in other groups and Western-backed rebels.

A second diplomat said talks between the U.N. team and the government had reached a stalemate because Damascus wanted to model the plan on previous truces that effectively forced rebels to surrender and the United Nations wants to avoid this.

"There is no reason for the regime to enter into the freeze, they believe they are militarily doing quite well, that they could potentially close the corridor to Aleppo and put it under siege," the diplomat said.

What the government wants would resemble one of the "enforced truces that the regime forces through sieges" in neighbourhoods in Damascus and Homs, the diplomat added.

A visit planned by de Mistura to Damascus was postponed last month. He had met with President Bashar al-Assad in November.

A senior U.S. military defence official said earlier this week that the military was likely to try to encircle Aleppo this year, cut rebel supply lines, and besiege the fighters.

"We assess the conflict is trending in the Assad regime's favour," Lt. Gen. Vince Stewart, head of the Defense Intelligence Agency, told a panel in the House of Representatives.

Elsewhere in the country the Syrian army mainly holds land in the south and west, including most of its urban centres. The hardline ISIS holds large tracts of land to the east and north and is being targeted by U.S.-led air strikes.

The Lebanese analyst, Nasser Qandil, said one of the main problems with the freeze talks was that the United Nations did not seem willing to fully address other issues, such as how to deal with the Turkish border, where Damascus says jihadists are crossing into Syria.

Qandil said the U.N. envoy had agreed with Assad that securing the Turkish border, which lies north of Aleppo, should come under any ceasefire plan but appeared to backtrack when he visited the Turkey-based opposition.

Asked to respond to his comments, a spokeswoman for de Mistura said consultations were continuing and the U.N. was talking to a wide range of combatants. "For us in the U.N., it's very clear who is a terrorist and who is not a terrorist," she said, referring to Security Council resolutions.

De Mistura, who took the position after two earlier envoys quit in frustration, is seeking to prevent a repeat of a truce in the Western city of Homs in May, where more than 1,000 insurgents withdrew and the government took over most parts.

The government had allowed hundreds of civilians to leave the city in February after lengthy U.N. mediation.

The U.N. also wants to avoid relocation of Syrian troops from Aleppo to other parts of Syria if a deal is reached, diplomats said.

Addressing the Foreign Affairs Committee of the European Parliament in Brussels late on Monday, de Mistura said the negotiations were continuing but were not easy.

"We all knew that having a freeze and not a classical old fashioned ceasefire is going to be a complicated one but we are pushing and will never give up," he said.

Rebel groups in the north also expressed early misgivings about the plan, fearing it would benefit the army.

In an interview last month, Assad suggested the plan should resemble previous truces.

"We implemented it in another city called Homs, another big city. We implemented it on smaller scales in different, let's say, suburbs, villages, and so on, and it succeeded," he told Foreign Affairs magazine. "So the idea is very good."

He said he would be willing to "deal directly" with rebels for a settlement in Syria but said most fighters were jihadists.

There was also concern among Western officials about how to get Nusra Front on board for an Aleppo truce, diplomats said. One said de Mistura's team had been told by rebel fighters they could rally the group if needed.