UN: Record 4.1 million in Syria got food aid in August

Over the last six weeks, WFP and partner agencies have crossed front lines to reach more than 580,000 people, over four times the 137,000 reached in the preceding six weeks 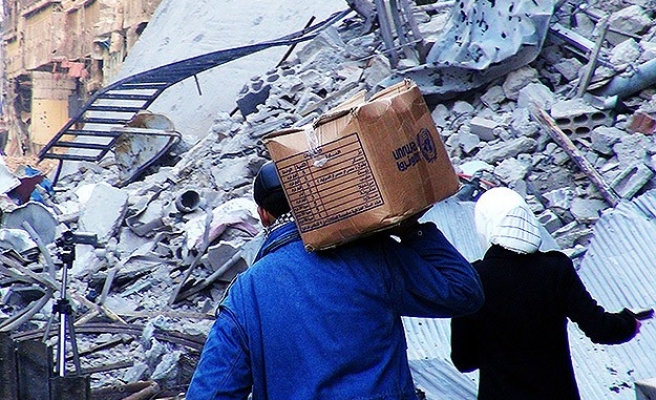 A record 4.1 million people in Syria received food rations in August due to more convoys being able to cross front lines and borders from Turkey and Jordan, the U.N.'s World Food Programme (WFP) said on Tuesday.

"We are reaching more people every day with urgently needed food assistance - many of them have been going hungry for months," Muhannad Hadi, WFP's regional emergency coordinator for the Syria crisis, said in a statement.

Over the last six weeks, WFP and partner agencies have crossed front lines to reach more than 580,000 people, over four times the 137,000 reached in the preceding six weeks, it said.

The U.N. Security Council authorised the movement of U.N. aid through four border crossings in July.

That ended more than a year of aid paralysis caused by Damascus denying permission for U.N. staff to cross borders into rebel-held areas. Although Syrian forces did not control those areas, the U.N. said it could not infringe Syrian sovereignty.

The improved access for humanitarian aid helped boost the number getting food rations from 3.7 million in July. However, WFP has never yet managed to reach its monthly target for feeding Syrians, which was 4.25 million in August, about a fifth of the pre-war population of the country.

WFP says it needs to raise $35 million per week to meet the food needs of Syrians affected by the conflict, including the 3 million refugees in neighbouring countries.