UN High Commissioner for Refugees, Antonio Guterresi called on the Organization for Security and Co-operation in Europe (OSCE) to provide mass international support for Syria. 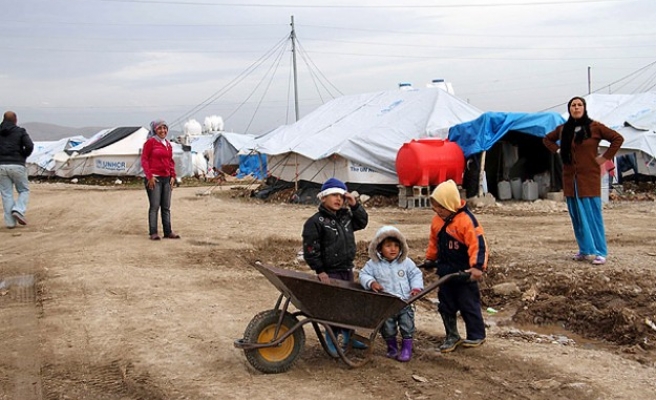 United Nations High Commissioner for Refugees (UNHCR) Antonio Guterres on Thursday called on the participating members of the Organization for Security and Co-operation in Europe (OSCE) to provide international support for Syria.

Speaking at the OSCE Permanent Council, Guterres said "The Syrian conflict has caused one of the worst humanitarian crises in decades. One that directly impacts the OSCE, specifically the participating member states in the region."

He stressed that the conflict in Syria is a major threat to global security. “Within a few years, Syria has gone from being the world’s second largest refugee host to becoming its fastest refugee-producing country,” he said.

He said that the UNHCR has registered 2.5 million Syrians as refugees in the region, though the real number may reach 4 million by the end of 2014. He emphasized that Syria’s neighbors Lebanon, Turkey, Jordan and Iraq have received a steady stream of refugees.

“Turkey - the second-biggest refugee-hosting country in the region and a member of the OSCE - has already spent over US$2.5 billion from its own budget to assist Syrian refugees. Although the country’s refugee capacity is of a different order, one must not forget that Turkey alone has received ten times as many Syrian refugees as the entire European Union,” Guterres has said.

He also said that the Syria crisis has profound implications on regional stability and global security.

“The generosity of Syria’s neighbors needs to be matched by massive international support, in a true spirit of effective burden-sharing. This is essential to preserving the space for people fleeing this brutal conflict and also a crucial contributor to maintaining regional stability. The region needs much more financial assistance than it is currently receiving to cope with an influx that would severely strain the capacities of even the world’s most developed countries,” Guterres said.

Guterres called on the OSCE to keep their borders open for Syrians who are forced to flee and seek protection abroad.

UN to vote on new Syrian resolution on Saturday

The announcement came only minutes after French UN envoy Gerard Araud, told journalists that the 15 UN members state body will wait for some time before the final vote.

According to western media reports, apart from requiring cross-border aid access, the new resolution also demands the end of shelling and end of aerial bombardment, including the use of barrel bombs.

Russia and China have blocked UN resolutions three times previously since the start of the three-year war. On Friday it was still unclear whether Russia, together with China will once again block the UNSC resolution, which threatens sanctions and fully condemns the government in Damascus

If Syria decides not to fulfill its obligations, the western-backed resolution, authored by Australia, Luxemburg and Jordan threatens “further steps” to reinforce its implementation.

The Chinese Foreign Ministry also said that a political solution should be pursued firstly by the Security Council.

The new humanitarian resolution was in the making for almost a year. In October 2013, UNSC also adopted a non-binding statement. It urged for more humanitarian access to Syria, but it has made little to no impact on the ground where fierce conflict still rages.

The UN said, more than 100.000 people died since the civil war in Syria started, in March 2011. Some 3.5 million Syrians are internally displaced and 2.5 million have sought refuge in neighbouring countries including over 600,000 of them in Turkey.