"The evidence available concerning the nature, quality and quantity of the agents used on 21 August indicated that the perpetrators likely had access to the chemical weapons stockpile of the Syrian military, as well as the expertise and equipment necessary to manipulate safely large amount of chemical agents," the U.N. investigators said in the report. 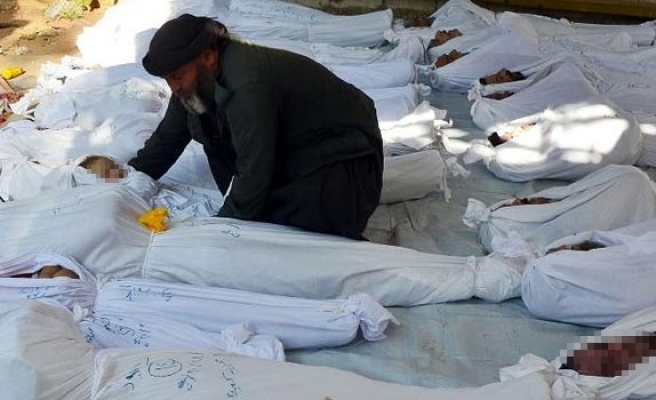 Chemical weapons used in two incidents in Syria last year appear to come from the stockpiles of the Syrian military, United Nations human rights investigators said on Wednesday in a report that went beyond previous findings.

The team of independent experts, led by Brazilian Paulo Pinheiro, said that so far they had confirmed the deadly nerve agent sarin was used in three incidents: the Damascus suburb of al-Ghouta on Aug. 21, in Khan al-Assal near Aleppo in March 2013 and in Saraqeb near the northern town of Idlib last April.

The first two attacks bore "the same unique hallmarks", according to the team of some two dozen investigators who include a military advisor.

"The evidence available concerning the nature, quality and quantity of the agents used on 21 August indicated that the perpetrators likely had access to the chemical weapons stockpile of the Syrian military, as well as the expertise and equipment necessary to manipulate safely large amount of chemical agents," the U.N. investigators said in the report.

"Concerning the incident in Khan al-Assal on 19 March, the chemical agents used in that attack bore the same unique hallmarks as those used in al-Ghouta," it said.

Pinheiro said his team was investigating up to 20 incidents where chemical weapons were used.

Chief United Nations investigator Ake Sellstrom, who led a team of inspectors to Syria, reported in December that chemical weapons were likely used in five out of seven attacks they had examined, but did not assign blame.

Sellstrom, without categorically saying which side was to blame, then said in January that it was "difficult to see" how the opposition could have weaponised the toxins used.

The Syrian government and the opposition have accused each other of using chemical weapons, banned under international law, and both have denied it.

President Bashar al-Assad agreed to destroy his chemical weapons following global outrage over the sarin gas attack at Ghouta in August, the world's deadlist chemical attack in 25 years. It drew a U.S. threat of military strikes that was averted after Assad pledged to give up his chemical arms.

Pinheiro said on Thursday his investigation had relied on the findings of the Sellstrom mission, going further.

"But we had made other investigations in terms of interviews of experts, interviews with functionaries involved," Pinheiro told a news conference.

His team interviewed a broad array of people including doctors, victims, journalists and defectors.

The task was compounded by the fact that Syria has never allowed the U.N. human rights investigators into the country.

"We conducted our own investigation including specialised expertise and of course we have been in close contact with the members of this Sellstrom mission," Pinheiro said.

It was not able to establish a verifiable casualty figure from the attacks, he said, adding: "What we can say is that at least several hundred people were affected".

Syria has shipped out about a third of its chemical weapons stockpile, including mustard gas, for destruction abroad, the global chemical arms watchdog said on Tuesday.