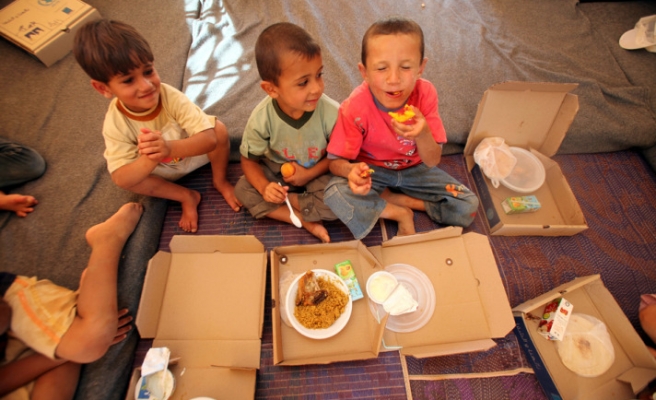 The UN food agency said Tuesday it had resumed assistance to hundreds of thousands of Syrian refugees in Jordan, a month after suspending aid over a lack of funds.

"We stopped assistance in September because we did not have the money," said Jonathan Campbell, the World Food Programme's emergency coordinator for Syrian refugees in Jordan.

"The good news now is that we have been able to improve what we were doing," he told a news conference.

"We are currently feeding this month 212,000 people in the extremely vulnerable category, and 226,000 vulnerable people but not as vulnerable as the first group," he said.

Campbell said the programme covers the needs of 85 percent of people registered as refugees in the country.

The United Nations refugee agency UNHCR estimates that more than four million Syrians have fled the civil war that has ravaged their country and reportedly killed more than 250,000 people.

In September, WFP said it had ceased assistance to 229,000 refugees in neighbouring Jordan.

"We need $15 million each month to continue what we are doing," said Campbell, adding that funds were available until January.

The kingdom says it has taken in 1.4 million Syrians fleeing the war but the UNHCR puts the figure at 600,000.

Around 80 percent of Syrians in Jordan live outside camps.

Campbell told the news conference that 2,000 refugees had stopped collecting food vouchers since September, presumably because they returned home or left Jordan for Europe.

He said a survey was conducted among 89 Syrian families who stopped receiving assistance last month "to get an idea of the impact of these cuts in assistance."

The UNHCR said Tuesday that more than 700,000 refugees and migrants have reached Europe's Mediterranean shores so far this year, more than half of them from Syria.