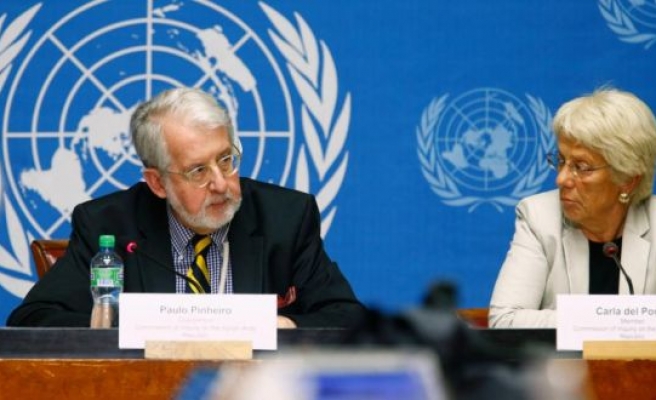 UN investigators on Thursday denounced the international community's failure to protect refugees fleeing Syria, saying the neglect of those forced to flee the conflict had fuelled Europe's migrant crisis.

In its latest report, the United Nations Commission of Inquiry on Syria said the responsibility to protect Syrian refugees "is not being adequately shared or shouldered."

The commission, established by the UN Human Rights Council in 2011, further documented the growing abuses in the Syrian conflict that has killed more than 240,000 people, forced another four million to flee the country and left some 7.6 million displaced internally.

The violence in Syria has become "endemic" and is "regrettably proliferating in its scope and extent," the report found, detailing a horrifying array of crimes against humanity and war crimes committed by the Syrian regime, the ISIL group and other armed opposition groups.

Floods of incoming refugees had previously caused significant tension in Syria's neighbours -- especially Jordan, Lebanon and Turkey -- but, as the UN investigators noted, the "failure to protect Syrian refugees is now translating into a crisis in Southern Europe."

Syrians account for most of the some 234,000 migrants who have washed up on Greek shores since January 1, according to the International Organization for Migration.

More than 2,000 Syrians have died at sea trying to reach Europe since the start of the conflict in March of 2011, the UN report said.

Many of the Syrians who have reached southern Europe have subsequently tried to move north in hopes of settling in wealthier countries such as Germany or Sweden.

To control the incoming flow of migrants and refugees, a number of European governments have increasingly relied on tougher measures, including border closures and the use of riot police and armed forces.

The UN commission called on all nations to both protect the rights of migrants and respect international laws that prohibit repatriation to countries that could be considered dangerous.

Echoing calls from UN officials, the panel said more "legal avenues" needed to be created that could allow refugees and asylum-seekers to resettle in safer countries.

The four investigators on the Syria commission extensively used eye witness testimony in compiling their reports, although the group has not yet been granted permission to visit Syria.

The commission has been gathering evidence that could potentially be used in future criminal proceedings against those responsible for the worst atrocities committed during the conflict.

The investigators have repeatedly appealed to a blocked UN Security Council to refer the cases to the International Criminal Court, but in vain.