Ban outlines dangers of mission - the first time the Organization for the Prohibition of Chemical Weapons oversees the destruction of a chemical weapons armoury during a conflict. 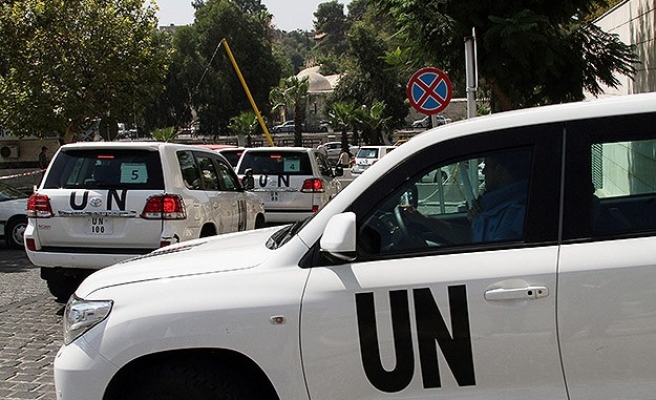 A team of around a hundred international experts, starting on November 1, will supervise and oversee the destruction of Syria's approximately thousand metric tons of chemical weapons, the UN Secretary General Ban Ki-moon announced in a letter to the UN Security Council on Monday afternoon.

The experts will join the advanced team who have already started work in Syria. The mission due to finish on June 30, 2014, will operate out of Cyprus and Damascus.  It will be a joint operation between Hague-based OPCW (Organization for the Prohibition of Chemical Weapons) and the UN.

In his letter to the 15 member-states of the UN Security Council, Mr. Ban warned the operation could be dangerous since OPCW and UN personnel would operate "across active confrontation lines and in some cases through territory controlled by armed groups that are hostile to the objectives of the Joint Mission."

The Syrian government is expected to provide security in the initial phases of the chemical weapons destruction.

The initial phase began last Sunday; during a second phase the chemical weapons stockpile and equipment will be eliminated and the total destruction of Syrian chemical weapons will be conducted in the third phase.

The UN head also mentioned that in the last phase it was "highly probable that assistance by other Member States will be required in the areas of the provision of both technical and operational advice, support and equipment, as well as security."

A special coordinator will be appointed to monitor the joint operation and liaise with the UN OPCW and the government in Damascus during the chemical stock pile destruction.

According to Ban Ki-moon’s letter obtained by some US media -- “the Joint Mission will be expected to support, monitor and verify the destruction of a complex chemical weapons program involving multiple sites spread over a country…, which includes approximately a thousand metric tons of chemical weapons, agents and precursors."