Navi Pillay, in a rare statement critical of the kingdom, voiced dismay at the conviction and "harsh sentencing" of Walid Abu Al-Khair. 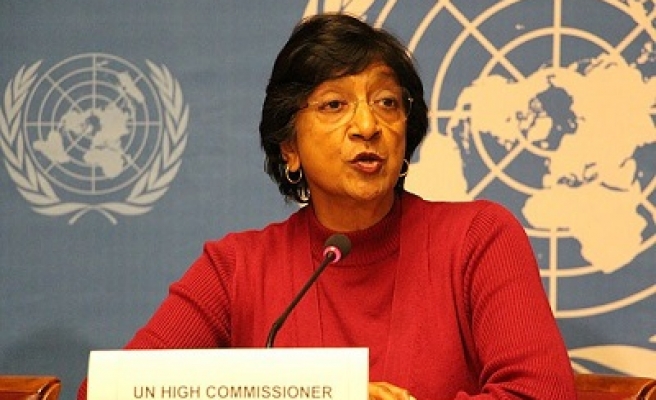 The top United Nations human rights official called on Saudi Arabia on Thursday to release activists she said had been arrested for peacefully demanding freedoms, halt the use of lashings and investigate their alleged ill-treatment.

Navi Pillay, in a rare statement critical of the kingdom, currently an elected member of the U.N. Human Rights Council, voiced dismay at the conviction and "harsh sentencing" of Walid Abu Al-Khair.

The prominent Saudi rights lawyer was sentenced to 15 years on Sunday on charges that included seeking to undermine the state and insulting the judiciary.

"Abu Al-Khair's case is a clear illustration of the continuing trend of harassment of Saudi human rights defenders, several of whom have been convicted for peacefully promoting human rights," Pillay said.

"I urge the Saudi authorities to immediately release all human rights defenders held in connection with their peaceful advocacy of human rights," she said.

Abu al-Khair had been on trial on sedition charges that included breaking allegiance to King Abdullah, showing disrespect for authorities, creating an unauthorized association and inciting public opinion.

Abu al-Khair, the founder and director of an organization named the Monitor of Human Rights in Saudi Arabia, was critical of a new anti-terrorism law passed by Saudi Arabia at the start of the year which was widely condemned by rights activists as a tool to stifle dissent.

"He is not alleged to have been involved in any violent activity but only for expressing his opinion," Pillay said, noting that he was tried in the Specialised Penal Court.

"Proceedings against human rights defenders in the Specialised Penal Court, as well as in other courts in Saudi Arabia, have fallen short of international fair trial standards," she said.

Harsh sentences have been handed down in such cases, including "long prison terms, heavy fines, travel bans, as well as corporal punishment", she added.

Abu al-Khair was fined 200,000 Saudi riyals ($53,300), banned from travelling for another 15 years and had all his websites closed down, the state news agency SPA said.

He asserts that he was subjected to solitary confinement, sleep deprivation and denied access to his lawyer and family, according to Pillay's statement.

Abdullah Al-Hamid and Mohammad Al-Qahtani were convicted by the same court in March 2013 for disobeying the ruler, questioning the integrity of officials, giving false information to foreign groups and forming an unlicensed group, Pillay said.

"The Court handed down sentences of 10 and 11 years in prison, respectively, against the two men, as well as travel bans of equal duration at the end of their prison terms."

The conviction of Ra'ef Badawi, a social media activist found guilty on charges of blasphemy in July 2013, was upheld in May. He was sentenced to two consecutive five-year prison terms, a 10-year travel ban, the permanent closure of the Liberal Internet Network website, a 20-year ban on participation in any media outlet and destruction of his computer, Pillay said.

"The sentence also included corporal punishment in the form of 1,000 lashes to be administered in a public space," she said.

Pillay called on Saudi authorities to halt the use of lashing, a corporal punishment that she said was not in conformity with international human rights law. This included the Convention against Torture, which Saudi Arabia has ratified.