UN, WHO appeal for tearing down of Syrian 'Berlin Wall' 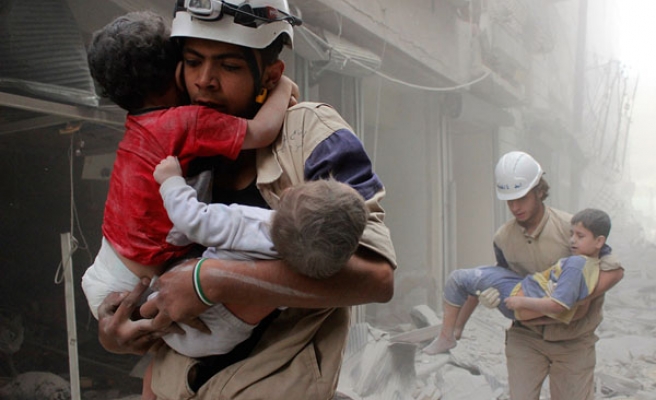 Aid officials have called for non-negotiable humanitarian access to besieged areas in Syria.

Speaking at UN headquarters in Geneva on Tuesday, Secretary General of the Norwegian Refugee Council Jan Egeland said: "As humanitarian workers we cannot wait another day for the parties to this horrible war to start what they should have done long ago."

"Put an end to the starvation of civilians in besieged areas; end attacks against schools, homes and hospitals, tear down the Berlin Wall of hindrances they have built between us who can help and millions of defenseless civilians in the conflict zones," Egeland added.

The UN has called for an end to the starvation of civilians and the political failure in the country.

Peace talks were due to start in Geneva this week.

Yacoub El Hillo, UN Resident/Humanitarian Coordinator, said “enough is enough”, calling for a suspension of air strikes in Syria to give the peace talks a chance to succeed.

However, the talks – which were due to start yesterday – have been delayed by disagreements over parties to be invited.

Turkey is opposed to the Syrian Kurdish Democratic Union Party (PYD) taking part on the opposition side, with Prime Minister Ahmet Davutoglu saying they should attend alongside the representatives of Syrian President Bashar al-Assad.

The PYD is affiliated to the PKK, listed as a terror organization by Turkey, the EU and U.S. due to the armed campaign it has been fighting against Turkey since 1984.

However, the PYD’s armed wing has been heavily involved in fighting ISIL on the ground in Syria with the support of a U.S.-led air campaign.

UN envoy Staffan de Mistura said a comprehensive list of “terrorists” operating in Syria, who would therefore be excluded from the talks, was still being worked on.

Meanwhile, UNICEF has launched a $2.8 billion appeal to reach 43 million children in need.

The largest section of the appeal – $1.16 billion – has been allocated for life-saving aid needed for Syria and the refugee populations in Egypt, Iraq, Jordan, Lebanon and Turkey.

"Syria is the most dangerous place to be child," UNICEF’s Syria representative Hanna Singer added.

As continuing conflict in the Middle East and elsewhere drives people to seek refuge in Europe, the UNHCR, the International Organization for Migration and some 65 other organizations on Monday appealed to donors for $550 million to support the ongoing humanitarian response.