UNSC resolution on Syria may refer to sanctions first

The UNSC moved boldly toward a binding resolution on Syria incorporating Chapter 7, which generally means a license to use “all necessary means” 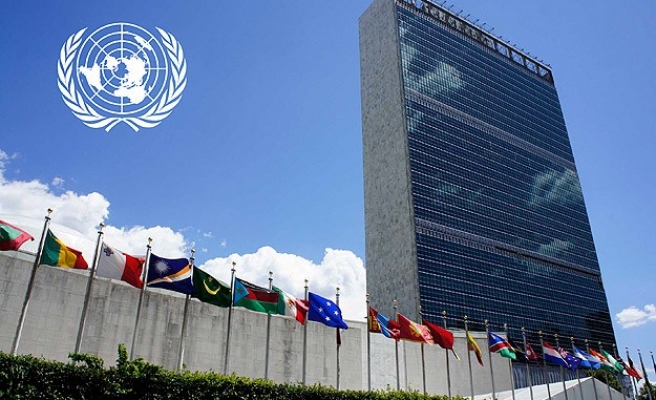 Diplomats of the five United Nations Security Council (UNSC) permanent members moved forward with the binding resolution on what type of consequences the Syrian government would face if they do not comply with the aftermath of their acceptance to declare, surrender and ultimately destroy their chemical weapons arsenal.

Ever since the UK introduced its first draft resolution on Syria at the UNSC, followed by French draft of the same, the negotiation over how to adopt one without facing another veto from Russia or China sounded, as one diplomat described it to AA, like a “mission impossible."

Yet, the news Wednesday afternoon of a possible breakthrough, while the Syrian question was being overshadowed with the sudden US-Iran diplomatic thawing, came as a surprise.

News was leaked through UN diplomatic sources that the UNSC moved boldly toward a binding resolution on Syria.

After the representatives of the permanent members of the Security Council, the US, UK, Russia, China and France, met for lunch on Wednesday with UN Secretary General Ban Ki-moon to discuss the crisis in Syria, some western diplomats were hinting of a deal on the resolution inching closer.

The raison d'être for the unexpected breakthrough, as a well informed UN source told AA, was the satisfaction of France and others with the position that sanctions would work as an initial solution for Syria if the government in Damascus tries to avoid its obligations.

Though French President Francois Hollande warned during his UN press conference after his address to the UNGA on Tuesday of efforts to water down the UNSC resolution on Syria, he clearly expressed the resolution must be binding and must have “consequences of sanctions” if it is broken.

Earlier this month in Geneva, US Secretary of State John Kerry and Russian Foreign Minister Sergei Lavrov hammered out a deal how to move forward with the situation in Syria in the aftermath of the deadliest chemical attack on civilians in the 21st century.

Keeping the spirit of Geneva

“We are taking at their word the agreement by the Russians and Americans in this matter, and we cannot accept less than what was agreed to,” Hollande said in New York.

Without the threat of sanctions, the French president said, “there would be no credibility” to the high level diplomacy.

Diplomats said the new resolution may include Chapter 7, which generally means a license to use “all necessary means”.

However, the authorization of military intervention or imposition of sanctions would require additional negotiations at the UNSG and new votes for that sort of resolution.

But some sources also cautioned on Wednesday that Russia will not be fully on the board until the threat of the use of force against Syria is no longer part of negotiations. Russia, through its spokesperson in New York, was fast to deny that a consensus had indeed been reached on the Syrian resolution at the UNSC.

According to UN diplomats familiar with the UNSC negotiations, consensus was only in sight on a broad basis, including a reference to sanctions if Syria fails to deliver regarding its chemical weapons.

The resolution would also include language to hold the perpetrators of the chemical attack in August accountable, despite it not being known whether that would include a referral to the International Criminal Court (ICC). Some western countries were pushing for ICC engagement as UN Secretary General Ban Ki-moon said last week at his press conference in New York.

But the resolution will include a prescription of what Syria should do and what punishment it could face if it does not comply with obligations.

In the meantime, associate spokesman for the UN Secretary General Farhan Haq told AA they are waiting to also see when and how the UNSC will move concretely on the resolution on Syria. “Once that happens you may be assured that we will have something to say,” Haq said.