The United States and several Gulf Arab allies have launched air and missile strikes on ISIL targets in Syria, U.S. officials said, opening a new, far more complicated front in the battle against the militants. 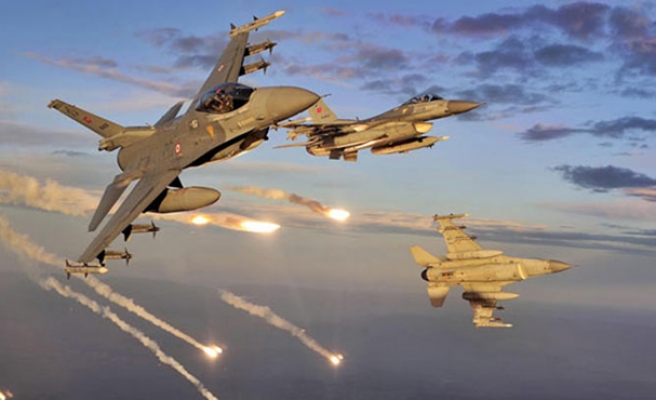 The United States and its partners carried out at least 50 air strikes on ISIL targets in the Syrian provinces of Raqqa and Deir al-Zor on Tuesday, while the Nusra Front was also hit by air strikes in northwest Syria, a group monitoring the war in Syria said.

Rami Abdulrahman, who runs the Syrian Observatory for Human Rights, said at least 70 ISIL fighters, 50 fighters from Nusra Front and eight civilians including children were killed in the air strikes. He also said Nusra Front positions had been struck in the provinces of Idlib and Aleppo in northwest Syria.

The Pentagon earlier said the United States and partner nations were carrying out the first air strikes against ISIL targets in Syria.

"I can confirm that U.S. military and partner nation forces are undertaking military action against (ISIL) terrorists in Syria using a mix of fighter, bomber and Tomahawk Land Attack Missiles," Rear Admiral John Kirby, Pentagon press secretary, said in a statement on Monday.

"Given that these operations are ongoing, we are not in a position to provide additional details at this time."

In a CENTCOM statement, it added the U.S. military had taken action to disrupt "imminent attack" against the U.S. and Western interests by "seasoned al Qaeda veterans" who had established a safe haven in Syria. "These strikes were undertaken only by U.S. assets," it said.

The statement said the U.S. had launched strikes from warships in international waters in the Red Sea and the North Arabian Gulf.

It said Bahrain, Jordan, Qatar, Saudi and the UAE had "also participated in or supported the air strikes against (Islamic State) targets. All aircraft safely exited the strike areas," it said.

Another official said at least one U.S. ship had launched the surface-to-surface Tomahawk missiles. Armed U.S. drones were also used in the attacks.

U.S. Secretary of State John Kerry traveled to New York at the weekend, ahead of the start of United Nations General Assembly meetings, for talks with counterparts from Arab and European allies to discuss U.S. plans to defeat the ISIL and hear their views on how they might participate.

On Monday, he met Saudi Foreign Minister Saud al-Faisal and British Foreign Secretary Philip Hammond, and participated in a meeting of more than a dozen countries, including Arab Gulf States, on the conflict in Libya.

A senior administration official said U.S. plans "to expand our efforts to defeat (ISIL) were discussed without specifics" during meetings but declined to elaborate.

The addition of Arab allies was seen as crucial for the credibility of the American-led campaign. U.S. allies in the Middle East are skeptical of how far Washington will commit to a conflict in which nearly every country in the region has a stake, set against the backdrop of Islam's 1,300-year-old rift between Sunnis and Shi'ites.

But many Gulf Arab states have been reluctant to be seen aggressively joining the U.S. campaign, fearing in some cases reprisals by extremists or forces loyal to the Syrian government.

The strikes took place hours before Obama goes to New York for the U.N. General Assembly where he will try to rally more nations behind his drive to aggressively take on ISIL.

Obama had shied away from getting involved in Syria's civil war a year ago, seeing no positive outcome for the United States, but the rise of ISIL and the beheading of two American captives forced him to change course.

General Lloyd Austin, commander of the U.S. military's Central Command, made the decision to conduct the strikes under authorization granted to him by Obama, Kirby said.