US asks Turkey to press Syria on crackdown

Clinton early Monday asked Turkey’s foreign minister to press Syria to “return its military to the barracks,” as the Syrian tanks pounded the city of Deir Al Zor for a second day. 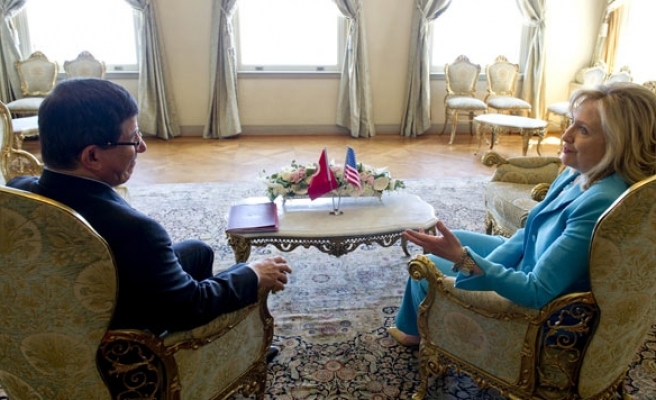 Secretary of State Hillary Clinton of the United States early Monday asked Turkey's foreign minister to press Syria to "return its military to the barracks," as the Syrian tanks pounded the city of Deir Al Zor for a second day.

Mrs. Clinton spoke by telephone with Turkish Foreign Minister Ahmet Davutoglu, who is scheduled to visit Syria on Tuesday, about Syria amid rising international calls on Damascus to stop a military crackdown on protests.

"Secretary Clinton discussed the US position that Syria must immediately return its military to barracks and release all prisoners of concern," State Department spokesman Mark Toner said.

"She asked the foreign minister to reinforce these messages with the Syrian government. She also discussed American support for a transition to democracy in Syria," he said.

Syrian tanks, meanwhile, pounded the city of Deir Al Zor in the country's Sunni tribal heartland for a second day on Monday.

Syrian tanks and troops poured into the eastern Sunni city of Deir Al Zor in a further escalation of the five-month uprising against President Assad's rule.

"Armored vehicles are shelling the Al Hawiqa district heavily with their 76mm guns. Private hospitals are closed and people are afraid to send the wounded to state facilities because they are infested with secret police," Mohammed, a resident, told Reuters by phone.

He said at least 65 people had been killed since tanks and armored vehicles stormed the provincial capital, 400 km (250 miles) northeast of Damascus, on Sunday, crushing makeshift barricades and opening fire.

The assault on the city, in an oil-producing province bordering Iraq, came a week after tanks stormed Hama, where residents of the city say scores have been killed in an ongoing siege to crush the uprising against minority Alawite rule.

Syrian authorities denied that any Deir al-Zor assault had taken place. The official state news agency said "not a single tank has entered Deir al-Zor" and reports of tanks in the city were "the work of provocateur satellite channels".

Syria has barred most journalists, making it hard to confirm events reported by either side in the conflict.

"The numbers of casualties are escalating by the hour," activist Suhair al-Atassi, a member of the Coordinating Union, said by phone from Damascus on Sunday.

Another activist said: "The Deir al-Zor assault could be the turning point where the repression will backfire and people will start taking up arms against the regime. Assad cannot repress a whole nation like this, and expect people to watch as thousands get killed or disappear."

Syrian authorities say they have faced armed attacks since the protests first erupted in March, blaming armed saboteurs for most of the civilian deaths and accusing them of killing 500 security personnel.

State television broadcast footage on Sunday of mutilated bodies floating in the Orontes river in Hama, saying 17 police had been ambushed and killed in the city.

In Deir al-Zor, authorities allowed local tribes to arm as a counterweight to a Kurdish population further northeast.

But relations between Assad's government and the province deteriorated after years of water shortages, corruption and mismanagement of resources devastated agriculture and led to the internal displacement of up to a million people.

Assad, who has repeatedly described the uprising as a foreign conspiracy to divide Syria, defended the army's campaign. He was quoted by the official national news agency on Sunday as saying his forces were fulfilling a national duty by "dealing with outlaws and convicts ... who seal off cities and terrorise the population".

"Our message will be decisively delivered," he said, drawing a rebuke from an Assad adviser, who described the Turkish statement as unbalanced.

U.N. Secretary General Ban Ki-moon told Assad by phone on Saturday he was alarmed by the escalating violence and demanded he rein in the army. He repeated his appeal on Monday during a visit to Japan.