The Kurdish administration in Syria has 'deliberately demolished civilian homes' and even burnt villages to the ground, Amnesty says 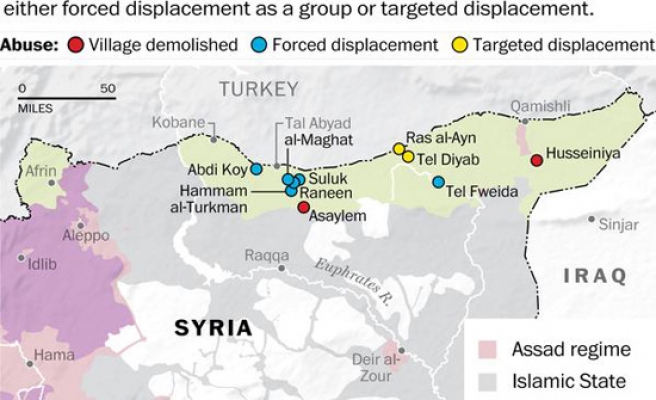 Waves of forced displacement and home demolitions carried out by Kurdish forces operating in Syria's north and northeast amount to "war crimes," a rights group said on Tuesday.

Amnesty International said a fact-finding mission to 14 towns and villages in northern and northeast Syria "has uncovered a wave of forced displacement and home demolitions amounting to war crimes carried out by the autonomous administration" led by Syrian Kurds.

After Syrian government troops withdrew from majority-Kurdish areas in 2012, aKurdish-led autonomous administration stepped in to fill the void.

Its security forces, including the Kurdish People's Protection Units (YPG) and Asayish police, have fought ISIL group in these areas.

But residents of Raqa province in the north and Hasakeh in the northeast interviewed by Amnesty say Kurdish forces have used the pretext of fighting ISIL to conduct mass demolitions.

Amnesty said the destruction it examined had not occurred as a result of fighting, but was part of "a deliberate, coordinated campaign of collective punishment of civilians in villages previously captured by IS, or where a small minority were suspected of supporting the group".

"They pulled us out of our homes and began burning the home... they brought the bulldozers... They demolished home after home until the entire village was destroyed," said one resident of the northeastern village of Husseiniya.

Amnesty said satellite images of Husseiniya showed that nearly 94 percent of the village had been destroyed between June 2014 and June 2015.

In villages in Raqa province, an ISIL stronghold, some residents told Amnesty that YPG fighters had accused them of supporting ISIL and threatened to shoot them if they did not leave.

Others said the YPG had threatened to call in air strikes by the US-led coalition fighting ISIL if residents did not evacuate their homes.

"They told us we had to leave or they would tell the US coalition that we were terrorists and their planes would hit us and our families," said one resident, Safwan.

Syrian Kurdish forces have regularly responded to such accusations by calling the incidents "isolated", and saying short-term evacuations occur to keep civilians safe from nearby fighting.

But Amnesty said many areas where forced displacement had occurred were not near the front lines.

"The Autonomous Administration must immediately stop the unlawful demolition of civilian homes, compensate all civilians whose homes were unlawfully destroyed, cease unlawful forced displacements, and allow civilians to return and rebuild," Fakih said.