US administration's policy in fight against ISIL is contradictory, terror groups should be treated same, says expert 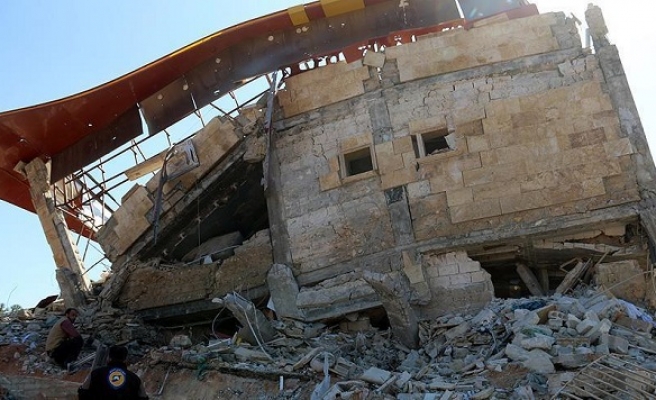 The PKK's "Syrian affiliate" -- that's how the PYD is referred to in an official U.S. counter-terrorism document.

The PYD is group designated as terrorist by Ankara that is trying to carve out territory near the Turkey-Syria border with the support of Russia and the Syrian regime.

On the profile page for the PKK -- listed as a terrorist organization by the U.S. -- found on the National Counterterrorism Center's (NCTC) website, the Democratic Union Party (PYD) is mentioned as a cause for a "heightened threat to Turkey and increased tensions along the border".

The PYD "has increased its presence in northern Syria along the border with Turkey by establishing control in Kurdish areas," the document says.

In the 2015 edition of the Counterterrorism Calendar issued by the NCTC, this particular reference to the group has been removed, but careful readers will notice it in the 2014 edition, as well as on the dedicated webpage still online as of Sunday, Feb. 21.

The dynamics of the links between Turkey, the U.S. and the PYD has caused a strain in the ties between Ankara and Washington.

U.S. officials have been adamant in recent weeks about refusing to recognize the PYD -- or its armed wing, the YPG -- as a terrorist organization, instead calling the YPG a "reliable partner" in the fight against ISIL, supporting the group with weapons and training.

“It has been very shortsighted that the U.S. is trying to supposedly make progress against ISIS without proper consultation with allies that includes Turkey and Gulf countries,” vice president of Washington-based Middle East Institute think tank Paul Salem told Anadolu Agency, referring to ISIL by an alternative acronym.

According to Salem, the White House has decided that “the PYD, regardless of its affiliation, has been effective” in fighting in ISIL and should be supported.

But, he added, this policy that centered on the ISIL war has created “huge contradictions” in administration policies as per its relations with its allies. Ankara considers all three -- the PYD, YPG and the PKK -- as terrorist outfits, and has frequently pointed to the link between these groups active in Turkey and Syria.

Turkish Prime Minister Ahmet Davutoglu has dubbed the YPG "a pawn of the Syrian regime" citing the Feb. 17 attack in Ankara that left 28 victims dead and 81 injured.

Turkish officials have determined that the attack was carried out jointly by a Syrian-national YPG member and PKK terrorists based in Turkey.

A day before the attack, Syria's envoy to the UN said the PYD enjoys the support of not only the U.S. but also the Assad regime.

Ja'afari's comments marked one of the Syrian regime's first direct acknowledgements of its cooperation with the PYD.

However, it was not unexpected.

On Oct. 23, Russian President Vladimir Putin said that the Assad regime and PYD need to unite forces, calling on the group to join the regime's side in the Syrian conflict.

The war, which has left the country in ruins after five years of fighting, has resulted in the deaths of more than 250,000 people and displaced 10 million, according to UN figures.

It has also made Turkey the country hosting the largest number of refugees in the world, with 2.6 million Syrian war survivors and 26 different camps.

Local sources near the Turkey-Syria border have told Anadolu Agency that Russian airstrikes have been facilitating the PYD's advance along the border.

The Turkish military shelled PYD and YPG positions in northern Syria for a week beginning Feb. 13 in response to artillery fire from PYD forces based around Aleppo's Azaz town, located just 6 kilometers (4 miles) from the Turkish border.

Announcing the military measure on Feb. 13, Prime Minister Davutoglu demanded the YPG withdraw from Azaz and the nearby Menagh military air base and warned the group against using either as a base to attack Turkey or Syrian opposition forces.

In an apparent reference to Russia, he said “forces using the PYD” had sought to cause a “massive refugee influx” towards Turkey.

He added that Ankara was ready to take further measures to defend its borders. Meanwhile in Washington, State Department spokesman John Kirby urged Turkey to halt its cross-border artillery fire and called on the YPG and its affiliated forces "not to take advantage of a confused situation by seizing new territory".

Describing the Obama administration’s policy in the Middle East “disordered and lacking comprehensive strategic vision” Salem said terror groups should be considered and treated the same if they are endangering security of a region or terrorizing civilians.