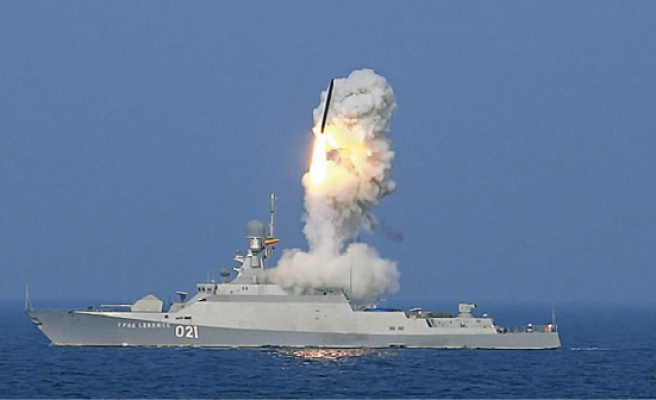 Four Russian cruise missiles aimed at targets in Syria crashed in Iran, a US official said Thursday, as regime troops backed by Lebanon's Hezbollah pressed a "vast offensive" against rebels in the war-torn country's west.

The missiles were thought to be among a salvo fired Wednesday from Russian warships in the Caspian as part of a nine-day-old air war targeting foes of President Bashar al-Assad.

Russia hit back at the claims, saying all the shots were on target, and the defence ministry posted a graphic on its website showing 26 missiles flying over Iran and Iraq before striking inside Syria. Tehran made no comment.

"Any professional knows that during these operations we always fix the target before and after impact. All our cruise missiles hit their target," ministry spokesman General Igor Konashenkov said in a statement.

Moscow launched an air war in Syria at the end of last month it said was aimed at the ISIL group and other "terrorist" organisations fighting in the country's four-year-old civil war.

Western powers have dismissed these claims as window-dressing for a campaign that primarily seeks to prop up Assad's embattled regime against a much broader group of rebels.

Washington said more than 90 percent of Russian raids have targeted groups other than ISIL or Al-Qaeda's Syrian affiliate, Al-Nusra Front.

Another US official said the missiles that landed in Iran were Kalibr-NK cruise missiles, which Russia had "used for the first time in a combat setting".

"They appeared to help operations by Iranian-backed Hezbollah" in Syria, where the powerful Lebanese Shiite group has been fighting alongside regime forces, the official added.