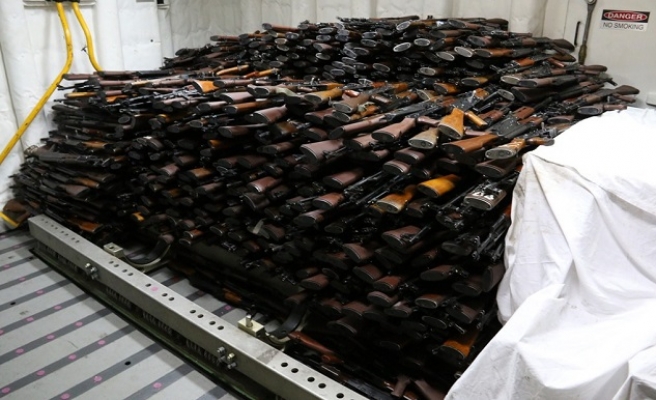 The U.S. Navy has seized a weapons shipment in the Arabian Sea it believes was going from Iran to Yemen.

The navy said on Monday that the warships USS Sirocco and USS Gravely on March 28 intercepted and seized the shipment of weapons hidden aboard a small dhow.

The Navy said the shipment included 1,500 Kalashnikov assault rifles, 200 rocket-propelled grenade launchers, and 21 50-caliber machine guns. It said the navy confiscated the arms and then released the crew on board the dhow.

"This seizure is the latest in a string of illicit weapons shipments assessed by the U.S. to have originated in Iran that were seized in the region by naval forces," the military said.

Iran is backing Yemen's Huthi rebels in a war against a Saudi-led, U.S.-backed coalition on the side of the government.

U.S. military officials have linked similar weapons seizures by the Australian and French navies earlier this year to Iran and the Shi'ite rebels, though Iran and the rebels both deny any involvement.

White House spokesman Josh Earnest said Iran's support for the Huthis is an example of its "destabilizing activities" in the region. He said the weapons shipment could be raised at the United Nations Security Council.

"We obviously are concerned about this development, because offering up support to the rebels in Yemen is something that is not at all consistent with UN Security Council resolutions," Earnest said.

U.S. officials have said in the past that Iran's direct involvement with the Huthis is limited, but that Iranian military personnel were training and equipping Huthi units.

The Saudi-backed coalition has been fighting to restore Yemen's President Abd-Rabbu Mansour Hadi to power since last year.