US convinces Saleh not to return to Yemen: Paper

Yemeni officials denied the report and said the president would return to Sanaa, where fighting between troops loyal to Saleh and pro-opposition tribesmen has been increasing. 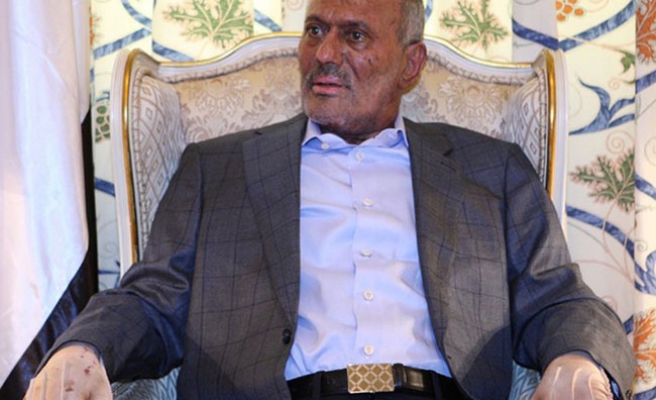 U.S. officials have convinced Yemeni President Ali Abdullah Saleh, convalescing in Saudi Arabia from an assassination attempt, not to return to his country, the pan-Arab newspaper Asharq al-Awsat reported on Monday.

The report came a day after the veteran Arab leader left hospital in Riyadh and was moved to a government residence for further recuperation, as mass protests against his 33-year rule wore into their seventh month.

Yemeni officials denied the report and said the president would return to Sanaa, where fighting between troops loyal to Saleh and pro-opposition tribesmen has been increasing.

Officials at the U.S. embassy in Sanaa were unavailable for comment.

Citing U.S. sources, the London-based Asharq al-Awsat said Washington had managed to pressure Saleh, 69, into retreating from his promise to return and lead a dialogue in Yemen.

They told Asharq al-Awsat that Saleh had been greatly influenced by the spectacle of toppled Egyptian leader Hosni Mubarak, who faced charges from within a black cage in a Cairo court last week.

The sources told the paper the U.S. ambassador to Yemen, Gerald Feierstein, had told the State Department to refrain from publicising pressure on the Yemeni president because he is "a stubborn person and cannot be put in a corner".

Saleh, a shrewd political survivor, backed out of inking the deal three times despite saying he accepted the plan. Yemeni officials have said the president took issue with the initiative's time frame, which required him to step down in 30 days and hold an election 60 days later.

"Saleh not returning to Yemen is an American desire but the president is determined to return," Abdulhafeedh al-Nihari, a member of Saleh's ruling party at his media office, told Asharq al-Awsat. "The solution however will not be far from the spirit of the Gulf initiative, except without the restrictions to specific time periods."

But U.S. sources were quoted by Asharq al-Awsat as saying that Saleh had been convinced he should stay in Saudi Arabia, which has told the president he must sign the Gulf deal before he can remain permanently.

The deal would also be modified to give greater guarantees of immunity to Saleh and his family, the pan-Arab paper said.