Kerry's trip to Saudi Arabia, Jordan and possibly other states in the Middle East is expected to try to build support in a region deeply skeptical of how far the United States is willing to commit 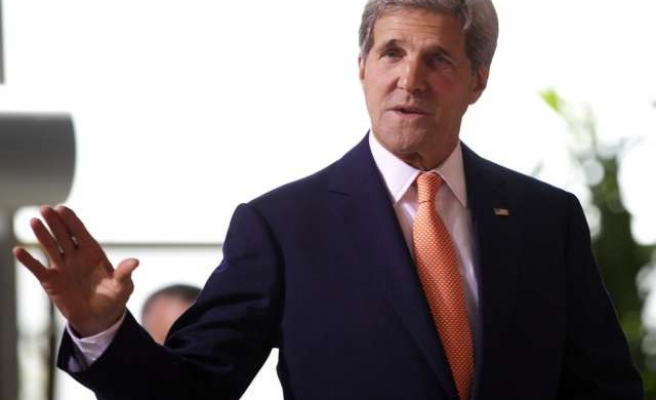 After threatening to destroy and degrade ISIL militants, the United States will court skeptical Gulf Arab allies this week and consider expanding training and arming of moderate Syrian rebels to lead the fight.

As U.S. Secretary of State John Kerry heads to the region on Tuesday, a meeting between the White House and top lawmakers in Congress is expected to discuss a slow-moving $500 million initiative, announced in June, to strengthen a loosely organized group of rebels who have struggled in their fight against the Syrian government and ISIL.

Sources with direct knowledge of the matter said lawmakers have questions over how the money would be spent and whether the United States will end a ban on shipments of powerful weapons to the rebels, such as surface-to-air missiles, due to fears they could be captured or used against the U.S. and its allies.

The sources also said they expected the $500 million to be high on the agenda at Tuesday's talks.

"There has been a serious reconsideration of this issue driven by the facts on the ground in Syria," said Fred Hof, a former State Department official involved in formulating Syria policy before joining the Atlantic Council think-tank in 2012.

"If you are going to consider an air campaign inside Syria, you are going to need people on the ground who can assist with target acquisition," he said. "You can't come to any kind of decisive result through air power alone."

A new push to assemble a formidable rebel force would mark a reversal for President Barack Obama who as recently as an Aug. 8 interview with The New York Times said the idea that rebels armed by the United States could make a difference in Syria has "always been a fantasy."

Obama is expected on Wednesday to outline a one-to-three-year plan to deal with the ISIL, who have seized a third of both Iraq and Syria.

While noting the speech is still being hashed out, White House officials signaled it would not represent a major shift in rhetoric or policy from what Obama has said previously. By late Monday afternoon, officials had still not decided on the timing of his remarks. An evening address would have higher stakes - and higher expectations - than a daytime slot.

Obama declared last week that the United States was ready to "take out" leaders of ISIL, and said NATO allies were prepared to join military action against a movement that he labeled a major threat to the West.

Kerry's trip to Saudi Arabia, Jordan and possibly other states in the Middle East is expected to try to build support in a region deeply skeptical of how far the United States is willing to commit to a complex web of overlapping sectarian conflicts.

"Tomorrow I will travel to the Middle East to continue to build the broadest possible coalition of partners around the globe to confront, degrade and ultimately defeat ISIL," Kerry told reporters.

State Department spokeswoman Jen Psaki said the United States was encouraged by foreign ministers from the 22-member Arab League who agreed on Sunday to take measures to confront ISIL, including suppressing foreign fighters, financing and other support in both Iraq and Syria.

"NOT GOING TO DO THIS ALONE"

But in Saudi Arabia, as elsewhere in the region, Kerry faces allies who may be reluctant to be seen aggressively joining the latest U.S. military foray in Iraq as Washington considers widening it to ISIL heartlands in neighboring Syria.

While Saudi leaders are alarmed at the prospect of a disintegrating Iraq that could shelter militants who may target the kingdom, they also deeply fear the fight against ISIL could hasten U.S.-Iran detente.

The Saudis told Kerry in June they were willing to help stabilize Iraq, but its majority Sunnis have only limited influence. Riyadh has had no functioning embassy in Baghdad since former dictator Saddam Hussein's 1990 invasion of Kuwait.

While the ruling Al Saud dynasty maintains connections to Iraqi Sunni tribes, these ties are not strong, Gulf diplomats say. Riyadh was also not involved in talks that led to the 2007-10 "Awakening" movement of Iraqi tribes against al Qaeda.

The kingdom's Sunni Muslim rulers see the battle to overthrow President Bashar al-Assad, an ally of Riyadh's regional foe Shi'ite Iran, as pivotal to their own future.

Riyadh fears that if Assad survives, Tehran will expand its influence across the region and encircle the kingdom entirely. As a result, Saudi Arabia and Iran are backing opposing sides in wars as well as political struggles in Iraq, Syria, Lebanon, Bahrain and Yemen.

Top Saudi officials last summer lashed out against Washington after it decided against bombing Assad following a poison gas attack and after U.S. officials began negotiations with Iran over its atomic program.

U.S. officials are expected to press Saudi leaders for funds to help arm Sunni fighters who can take on ISIL, possibly including channeling much-needed money to the moderate Syrian rebels, said several former U.S. government officials who retain close ties to the government.

In Jordan, Kerry is expected to receive requests for extra military aid, including helicopters and border security equipment, along with part of the $500 million allocated to help train Syrian rebels, a Jordanian official told Reuters.

Jordan is considered a top choice to host any training of the rebels due its close security relationship with Washington, proximity to neighboring Syria and a pool of more than 600,000 Syrian refugees. Amman, however, fears violent retaliation from Syria if its territory is used for overt training.

Jordan already hosts a small and ostensibly covert, effort by the CIA to equip and train small groups of Assad's opponents.

"Kerry's general message will be that, 'Look, President Obama is committed to acting decisively to destroy ISIL, but he is not going to do this alone,'" said James Jeffrey, a veteran diplomat who was U.S. Ambassador to Iraq from 2010-12.

"Kerry is also going to want their outreach to the Sunni tribes," he said of the Saudis. "In terms of outreach, we are talking about money, influence."