US, France warn Syria regime ahead of new peace talks 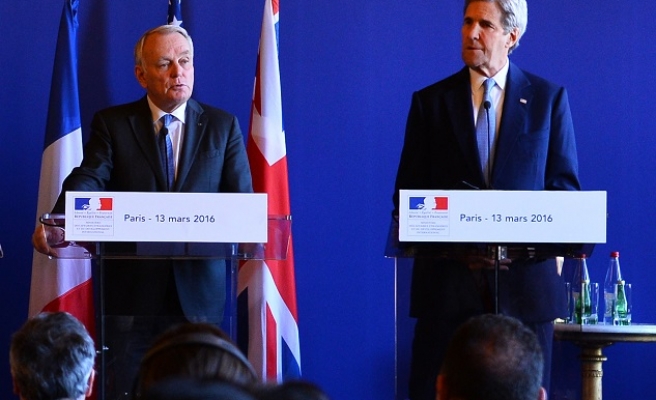 The United States and France warned the Syrian regime on Sunday against trying to disrupt the fragile ceasefire as the warring sides prepared for fresh peace talks to end the brutal five-year conflict.

The UN-brokered indirect negotiations are due to start Monday in Geneva, the latest international push to try to end a war that has killed more than 270,000 people and forced millions from their homes.

After talks with European allies in Paris, US Secretary of State John Kerry hit out at comments by his Syrian counterpart that removing President Bashar al-Assad would cross a "red line" in the negotiations.

Kerry warned Syria and its allies Russia and Iran against "testing boundaries" or lessening their compliance with a fragile February 27 truce brokered by Washington and Moscow that has largely held despite each side accusing the other of violations.

While analysts say much has changed since the last round of talks collapsed in February, the fate of Assad and the holding of elections with 18 months remain huge obstacles to peace.

Muallem said in Damascus Saturday: "We will not talk with anyone who wants to discuss the presidency... Bashar al-Assad is a red line."

"But the fact is (Assad's) strongest sponsors Russia and Iran have both adopted... an approach which dictates that there must be a political transition and that we must have a presidential election at some time," he added.

Kerry urged Russian President Vladimir Putin to bring the Syrian regime into line, saying he should be concerned that Assad had used his foreign minister "to try and act as a spoiler, to take off the table something that president Putin and Iran had committed to".

"So this is a moment of truth, a moment where all of us have to be responsible."

Kerry hailed the fact that the ceasefire had led to a reduction of violence of up to 90 percent, and made possible the delivery of emergency supplies to some 150,000 civilians in besieged areas.

"Despite this progress, we all of us here remain deeply concerned by the Assad regime's practice of removing badly needed medical supplies from those supplies and in particular the surgical kits," he said.

Kerry said the coalition had pushed the ISIL extremist group out of 20 percent of the territory it once controlled in Syria and that 600 ISIL fighters had been killed in the last three weeks.

He highlighted the importance of the Geneva process in tackling the unprecedented refugee crisis in Europe, saying that if the ceasefire did not hold "we will be back here next year or even the year after next facing a Middle East with even more refugees, even greater numbers of dead and displaced, even more suffering."

The HNC has repeatedly called for Assad's departure as a prerequisite for any deal.

"We believe that the transitional period should start with the fall, or death, of Bashar al-Assad," chief opposition negotiator Mohammad Alloush said Saturday.

"It cannot start with the presence of the regime, or the head of this regime still in power."

UN peace envoy Staffan de Mistura has said the Geneva meetings, opening on the eve of the fifth anniversary of the start of the conflict in March 2011, would not last more than 10 days.

Assad's fate has long been a major stumbling block, with Russia rejecting any suggestion he should go, while the United States wants him to step down.

In the latest violence to threaten the ceasefire, Al-Qaeda fighters and allied extremists clashed with a rebel faction known as Division 13 overnight in northwestern Syria after storming its weapons depot, the group said.

According to the Syrian Observatory for Human Rights monitoring group, the fighting left at least six combatants dead, four of them identified as Division 13 fighters.