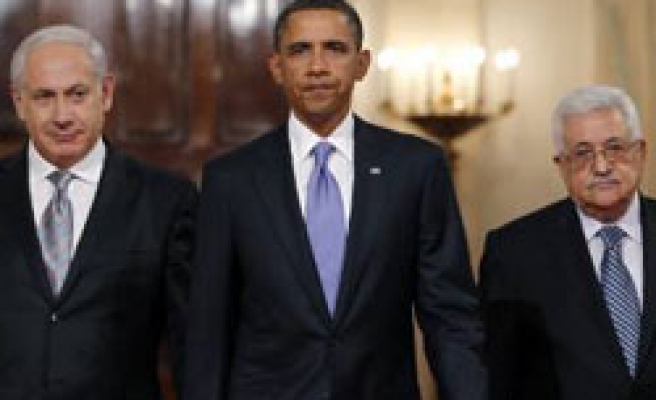 President Barack Obama urged Israeli and Palestinian leaders on Wednesday not to let the chance for peace slip away, bringing them together for ceremonial handshakes at the White House on the eve of relaunching direct talks.

But Obama acknowledged skepticism "in some quarters" about his prospects for succeeding where so many U.S. leaders have failed and said he was under no illusions about the tough challenges ahead.

Netanyahu and Abbas shook hands and voiced commitment to the U.S.-sponsored diplomatic drive, which sets a one-year target for reaching a peace deal on Palestinian statehood, a time frame most analysts call a long shot.

"As I told each of them today, this moment of opportunity may not soon come again. They cannot afford to let it slip away," Obama said earlier after one-on-one talks with Netanyahu and Abbas before hosting all the leaders for dinner.

But the fragile peace process already faced a major stumbling block with Israel resisting any formal extension of a partial freeze on construction in Jewish settlements in the occupied West Bank. Abbas said he could pull out of the talks if building resumes after the Sept. 26 expiration of the moratorium.

Obama, saying he was "cautiously hopeful" about the prospects for reaching a peace deal, pledged to put Washington's full weight behind the process but insisted it would not impose solutions on the parties.

Mubarak backed Palestinian demands for an extension of the settlement moratorium and directly challenged Netanyahu to make good on his peace pledges.

"Call for freeze on all settlements"

Abbas publicly demanded a freeze on all Israeli settlement buildings at the launch of landmark US-mediated peace talks at the White House.

He said the demand was not a "precondition" to direct Israeli-Palestinian peace talks, but a goal to implement an "agreed obligation."

Abbas also called for an end to all Israeli closures and blockades, preventing freedom of movement for Palestinians.

Earlier, Israeli Prime Minister Netanyahu's office said there had been no change to Israeli policy, which would allow a current partial freeze on West Bank settlement building to expire at the end of this month.

"President Abbas, you are my partner in peace," Netanyahu said.

"I came here today to find an historic compromise that will enable both our peoples to live in peace and security and dignity."

But Netanyahu's warm words did not disguise the steel of his position.

Netanyahu vowed he would secure assurances on security.

Abbas, politically weak, could suffer another blow to his prestige among his people if he sticks with the talks while Israel accelerates building on land occupied in 1967.

Obama pronounced himself "cautiously optimistic" about the day's events, though many analysts have commented that prospects for progress seem dim.

"We are under no illusions. Passions run deep. Each side has legitimate and enduring interests. Years of mistrust will not disappear over night," Obama said.

The issues on the table at the US-mediated talks -- the status of Jerusalem, security, the borders of a Palestinian state and the right of return for Palestinian refugees -- have confounded all previous mediation attempts.

Clinton, Netanyahu and Mahmud Abbas will all make opening statements to the media at the start of their meeting, due to begin at 10:00 am (1400 GMT).

The Quartet of the United States, the European Union, the United Nations and Russia launched a roadmap for peace in 2003 that calls for a Palestinian state living alongside a secure Israel.

Top level talks in search of the peace deal broke off in 2008 when Israel invaded the Gaza Strip, killing up to 1500 Palestinians.