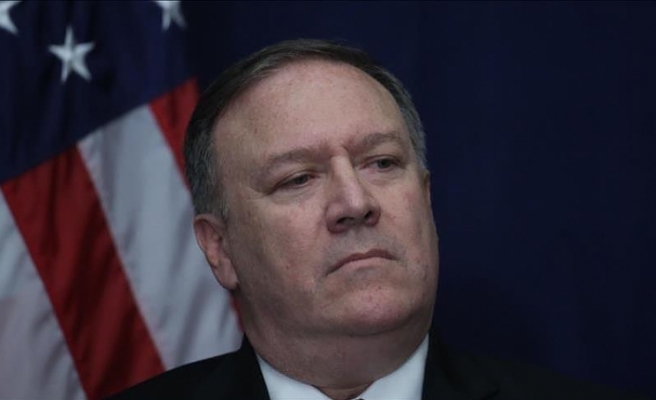 U.S. Secretary of State Mike Pompeo on Monday concluded a week-long visit to the Middle East.

As part of the tour, the top U.S. diplomat visited Jordan, Iraq, Egypt, Bahrain, Qatar, the United Arab Emirates (UAE) and Saudi Arabia, where he held talks with heads of state and high-ranking officials of these countries.

Pompeo was scheduled to visit Oman and Kuwait as part of the tour, but he cut short his visit and returned to the U.S. for "family funeral."

The first leg of Pompeo’s tour took him to Jordan where he vowed to pile more pressure on Iran and provide support for U.S. allies in the region.

"The most significant threats to the region are Daesh and the Islamic revolution," he said during a joint press conference with his Jordanian counterpart Ayman al-Safadi in Amman.

Iranian Foreign Minister Javad Zarif hit back at Pompeo, saying “the U.S. is substituting a real foreign policy with Iran-obsession and phobia”.

He said Pompeo and U.S. National Security advisor Jon Bolton's "pure obsession with Iran is more and more like the behavior of persistently failing psychotic stalkers."

The U.S. has imposed two rounds of sanctions on Iran since August after Washington unilaterally withdrew from a 2015 landmark nuclear agreement with Tehran.

The U.S. secretary also visited northern Iraq’s Kurdish region where he met with head of the region’s government Nechirvan Barzani and his predecessor Massoud Barzani.

In statements during his visit to Iraq, Pompeo said U.S. President Donald Trump's decision to withdraw all American troops from Syria was "very clear".

He said Washington was talking to Turkey and PYD/YPG terror group on how to effectuate the pullout of U.S. forces in Syria in a "way that protects our forces, makes sure that the Americans are safe."

"We will complete the mission of taking down the last elements of the caliphate before we depart," said Pompeo, referring to the Daesh terror organization.

Last month, Trump announced plans to withdraw all U.S. troops from Syria, claiming that the American forces had defeated Daesh there.

Ankara has long criticized the U.S. for working with PYD/YPG terrorists to fight Daesh in Syria, saying that using one terror group to fight another makes no sense.

"The U.S. stands firmly with Egypt in its commitments to protecting religious freedom and in the fight against terrorism that threatens all of our friends in the Middle East," Pompeo tweeted regarding his visit to Cairo.

Pompeo came under fire from many Egyptians for failing to address al-Sisi's harsh crackdown against the opposition in the country.

After Egypt, the U.S. secretary of state headed to the Gulf state of Bahrain, where he held talks with King Hamad bin Issa Al Khalifa.

Speaking to Fox News during his visit to Manama, Pompeo called for holding an international conference -- to be held in Poland on Feb. 13 and 14 -- to discuss Iran and the wider Middle East.

The proposed conference, he said, would "focus on Middle East stability and… security here in this region, and that includes… making sure that Iran is not a destabilizing influence”.

He went on to assert that “dozens” of European, Asian and African states would send representatives to the event, although he refrained from specifying which ones would attend.

After Bahrain, Pompeo headed to the UAE for talks with Crown Prince Mohammed Bin Zayed.

In remarks he gave to the Saudi-funded Al-Arabiya news channel from the UAE, Pompeo addressed the murder of Saudi Journalist Jamal Khashoggi inside the Saudi Consulate in Istanbul in October.

Pompeo said the U.S. seeks accountability for those involved in Khashoggi’s killing.

The Saudi journalist’s body has yet to be found amid reports it was dismembered and chemically dissolved.

Riyadh has indicted 11 people over Khashoggi's killing and is seeking the death penalty for five suspects. But critics have suggested the individuals are merely taking the fall for Saudi Crown Prince Mohammed bin Salman's operation after an unexpected international outcry.

Pompeo said Trump refuses to limit ties with Saudi Arabia to Khashoggi’s issue, affirming that Trump considers the kingdom a "key ally" for the U.S. and their partnership will keep going.

After the UAE, Pompeo visited the Qatari capital Doha from where he hailed what he termed Qatari support for Washington’s anti-terrorism efforts.

Speaking during the opening session of the second U.S.-Qatari Strategic Dialogue, Pompeo said the U.S. and Qatar work together to settle many regional issues, including Afghanistan and Iraq.

He also said that Washington will seek to get new answers from bin Salman regarding Khashoggi’s murder, describing the crime as “unacceptable”.

Oil-rich Saudi Arabia was the final leg in Pompeo’s Middle East tour, where he met with Saudi King Salman and his crown prince.

In statements carried by CBS news channel during his meeting with bin Salman, Pompeo described his Middle East tour as “good”.

"I want to talk to you about a couple of places we've been. We think we learned a lot along the way that will be important going forward," he said during the meeting with the Saudi crown prince.

Pompeo also underlined the importance of reaching a political solution to the 4-year conflict in Yemen and "the need for continued regional efforts to stand against the Iranian regime's malign activity and to advance peace, prosperity, and security," according to a statement issued by the U.S. Department of State.