US praises Assad's role in destruction of chemical weapons

Kerry lauded the start of destruction of chemical weapons in Syria as a "good beginning". 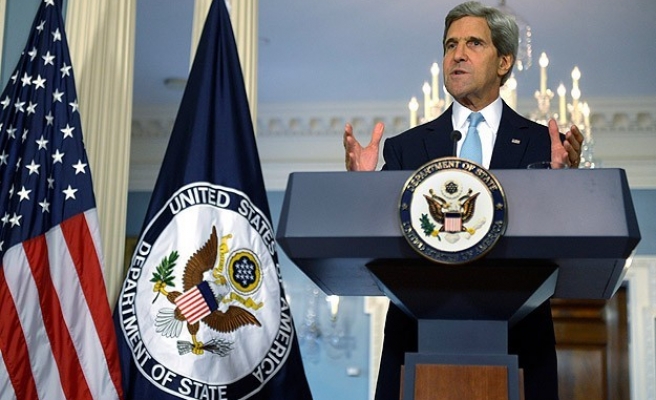 US Secretary of State John Kerry lauded the start of destruction of chemical weapons in Syria as a "good beginning" and said Washington and Moscow had agreed to press the United Nations to set a date for a Syria peace conference in November.

In unusual praise for Damascus, Kerry also gave the government of President Bashar al-Assad credit for quickly complying with the U.N. resolution on destroying its chemical weapons arsenal.

"I think it is extremely significant that yesterday, Sunday, within a week of the resolution being passed, some chemical weapons were already being destroyed," Kerry said at a joint news conference with Russian Foreign Minister Sergei Lavrov at an Asia-Pacific summit on the Indonesian resort island of Bali.

"I think it's also credit to the Assad regime for complying rapidly, as they are supposed to."

But he added: "Now, we hope that will continue. I'm not going to vouch today for what happens months down the road, but it's a good beginning, and we should welcome a good beginning."

A team of international experts from the Organization for the Prohibition of Chemical Weapons in The Hague and U.N. personnel began destroying Syria's chemical gas arsenal on Sunday.

Their work follows an agreement hammered out between Washington and Moscow after a deadly Aug 21 chemical weapons attack in the suburbs of Damascus, which prompted U.S. threats of air strikes against the Syrian government. The elimination of the chemical weapons is expected to continue until at least mid-2014.

More than 100,000 people have died in Syria's conflict, which began in early 2011 with peaceful demonstrations seeking more democracy but deteriorated into a sectarian civil war.

On Bali, Kerry and Lavrov first met with aides and then one-on-one, discussing ways to end Syria's civil war and talks on Oct. 15-16 between world powers and Iran on ending a dispute over its nuclear weapons program.

Kerry characterized his meeting with Lavrov as "one of the most productive we have had", saying they spoke at length about ways to bring Syria's warring parties together in Geneva, known as the Geneva 2 talks.

"We re-committed today very specific efforts to move the Geneva process as rapidly as possible," Kerry said, saying both sides would "lay the groundwork for a round of talks".

They will meet with United Nations special envoy for Syria, Lakhdar Brahimi, to finalise a date for the peace conference, he added.

Brahimi said on Sunday it was not certain that the peace talks would take place in mid-November as planned.

Assad told a German magazine he would not negotiate with rebels until they laid down their arms, and said his most powerful ally Russia supported his government more than ever. He said he did not believe it was possible to solve the conflict through negotiations with the rebels.

"In my view, a political opposition does not carry weapons. If someone drops his weapons and wants to return to daily life, then we can discuss it," he was quoted as saying by Der Spiegel.

Kerry was however hopeful for talks in November.

Lavrov, speaking through an interpreter, said Moscow would "do everything" it could to ensure that Assad abides by the U.N. resolution, which demands the eradication of Syria's chemical weapons and endorses a plan for a political transition in Syria.

But Lavrov said Syria's opposition groups could not set pre-conditions for the talks in Geneva and should come prepared to "speak with one voice".

Kerry also dismissed a suggestion that the United States and Iran were becoming closer.

Washington has insisted that actions, not words, by Iran will convince it that Tehran is serious about resolving differences.

Kerry said the U.S. and its allies were waiting for plans from Iran that show its nuclear program was being used for peaceful purposes, and not to develop nuclear weapons.

"The United States and our allies are absolutely prepared to move in appropriate ways to meet their actions, so we still have to wait and see where that comes out," Kerry added.

But he added: "The talk of these first days and the exchanges of a couple of gains and phone call do not indicate closeness," said Kerry. "They indicate an opportunity, they indicate an opening of a door to some discussion," he added.

Six world powers - the United States, Britain, France, Russia, China and Germany - are to meet with Iran in Geneva next week.

Kerry said he and Lavrov also discussed talks between Moscow and Washington on cooperation in missile defence.