US refuses to confirm YPG behind Ankara attack

"I'm not going to speak to specific evidence ... as far as we know, an investigation is ongoing," spokesman says 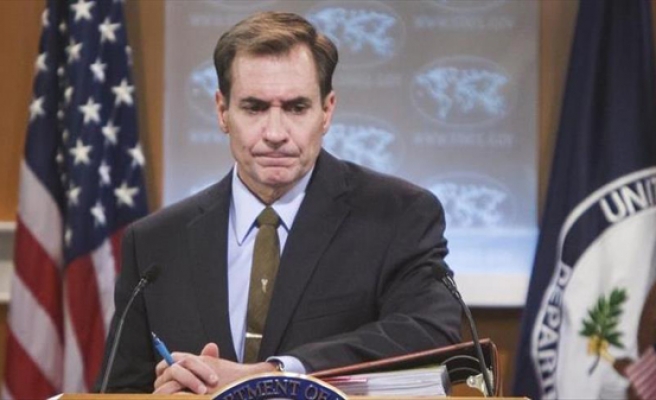 The U.S on Thursday would neither confirm nor deny that terrorist group YPG’s responsibility for a deadly terror attack in Ankara a day earlier.

"I'm not going to speak to specific evidence that others may be looking at or be talking about while, as far as we know, an investigation is ongoing," said State Department spokesman John Kirby.

The YPG is the armed wing of the terrorist PKK's Syrian affiliate, PYD.

Turkey considers the three groups terror outfits but the U.S. designates only the PKK as a terrorist organization and regards the YPG as a "reliable partner" in northern Syria fighting ISIL.

Describing the events in Ankara as "clearly a terrorist attack" and saying it was still an "open question", Kirby said he was not in "a position one way or another to ascribe responsibility".

Turkey, like every other nation, has the right to do what it needs in order to protect its people from terrorist attacks, Kirby said, but the U.S would continue to support the YPG.

Asked to comment on Turkish President Recep Tayyip Erdogan's comments that the U.S. should chose between its ally, Turkey, or the YPG, Kirby said the issue was not about choosing sides, and that even the best friends do not "agree on everything".

He said the U.S. was clear about not supporting a "semi-autonomous zone for Kurds there in [northern] Syria".

"We understand the concerns that the Turkish government continues to make about these groups and about their border," he said.

Regarding a possible Turkish exit from the anti-ISIL coalition in Syria in order to focus its attention on fighting the YPG, Kirby said the U.S. wanted to continue to see Turkey as part of the coalition and contribute to the fight.

Kirby's comments came after the Turkish Prime Minister Ahmet Davutoglu said the perpetrators had been identified from collected intelligence, and that the attack was carried out by YPG member Salih Necer, who entered the country from Syria.

PYD leader Salih Muslim denied Davutoglu's claims and distanced the group from the attack. In response, Turkish President Recep Tayyip Erdogan said that even with denials from the PKK and PYD, evidence provided by Turkey’s Interior Ministry pointed to those groups.

The YPG is currently seizing additional territory outside of Afrin, including areas close to Azaz and the Manakh Air Base in northern Syria -- areas close to the Turkish border.

Turkey has shelled PYD and PKK positions in northern Syria for four consecutive days in retaliation to artillery fire from PYD forces based around Azaz, located in Aleppo’s northern countryside just 6 kilometers (4 miles) from the Turkish border.

The exchange of fire came after the YPG's recent advance into Azaz, which has been the scene of recent heavy fighting.

The PYD is the Syrian branch of the terrorist-declared PKK, which has since 1984 targeted Turkish security forces and civilians.