US, Russia to prepare for Syria peace talks

The humanitarian group Oxfam America said it was "cautiously optimistic" about Lavrov's statements, but that it had heard talk of peace talks before. 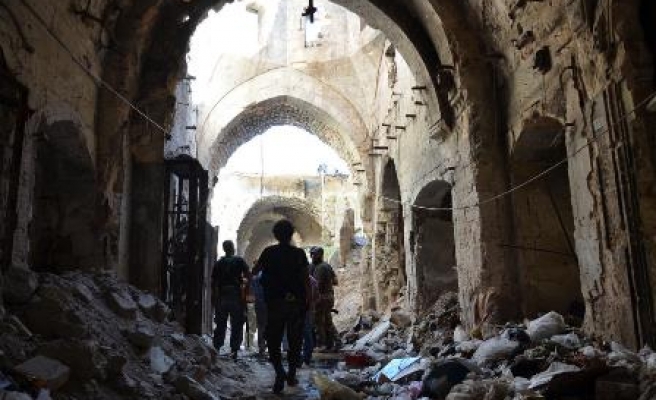 U.S. and Russian officials agreed on Friday on the need to convene a long-delayed Syrian peace conference in Geneva as soon as possible, but they offered no concrete plan to bring the warring government and rebels to the table.

Russian Foreign Minister Sergei Lavrov told reporters after five hours of political and security meetings in Washington that officials from the two countries will meet again by the end of the month to prepare for the Syria talks.

He said much of his meeting with Secretary of State John Kerry was devoted to Syria and both men agreed they needed to convene a so-called Geneva 2 conference "as soon as possible."

Asked whether this conference would in fact ever happen, Lavrov said that Russia already had won the agreement of its ally the Syrian government to send a delegation to Geneva without any preconditions.

"John Kerry assured me that the opposition would be persuaded to come to Geneva without any preconditions on the basis of reaching agreement with the government," said Lavrov.

A U.S. official briefing reporters after the talks, which also included Defense Secretary Chuck Hagel and his Russian counterpart Sergei Shoigu, said Washington was working closely with the Syrian opposition but the onus was on Damascus.

Moscow and Washington have been trying since May to organize an international peace conference to bring an end to the violence in Syria that has killed some 100,000 people in two years. But hopes that it can take place soon are fading quickly.

The humanitarian group Oxfam America said it was "cautiously optimistic" about Lavrov's statements, but that it had heard talk of peace talks before.

"We have seen similar promises come and go without any noticeable action," said Shannon Scribner, the group's humanitarian policy manager, adding that "again, no firm date or plans are in place."

"Calls for peace must be supported by action and commitment. Otherwise, talk is cheap," she said in an e-mailed statement from Boston.

Kerry and Lavrov originally announced that they would try to hold the conference, which is intended to bring rebels and representatives of Syrian President Bashar al-Assad's government to the negotiating table, by the end of May.

But the date keeps slipping. First the talks were bumped to June, then July. Then U.N.-Arab League peace mediator Lakhdar Brahimi, who held talks with senior U.S. and Russian officials in Geneva, ruled out a peace conference before August.

Battlefield gains by Assad have added to questions about when and even whether it will take place.

The point of the conference was to revive a plan adopted last year in Geneva. At that time, Washington and Moscow agreed on the need for a transitional Syrian government, but left open the question of whether Assad could participate in the process.

The United States, like the Syrian rebels, says Assad and his family should play no role in a transitional government, though Russia says there should be no conditions on the talks.

Both Lavrov and Kerry acknowledged their sharp differences over former U.S. spy contractor Edward Snowden and other issues going into the so-called "2+2" talks, the first such top-level meeting since 2008.

The Snowden affair and the cancellation of the summit have taken U.S.-Russian relations to one of their lowest points since the Cold War and Obama will have done little to ease the mood by saying on Friday that the Russian president can sometimes appear "like a bored kid in the back of the classroom."

Kerry opened Friday's meeting saying that while Washington and Moscow differ on aspects of the Syria crisis, "both of us and our countries agree that to avoid institutional collapse and descent into chaos, the ultimate answer is a negotiated political solution."

Lavrov in his opening remarks said they agreed to do everything they could to meet the goal they had set to unify the Syrian government and opposition.