Two countries backed the aim of a 'unified, pluralistic and stable country for all Syrians' 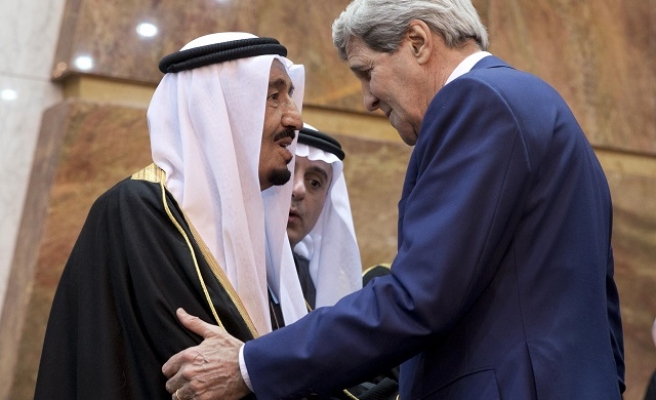 US Secretary of State John Kerry and King Salman of Saudi Arabia on Saturday called for greater international efforts to restore stability to Syria without President Bashar al-Assad at its helm.

The two countries backed the aim of a "unified, pluralistic and stable country for all Syrians," State Department spokesman John Kirby said.

"Both sides noted the importance of mobilizing the international community to support this goal and reiterated the need for a transition away from Assad.

"They pledged to continue and intensify support to the moderate Syrian opposition while the political track is being pursued."

Kerry flew in to Riyadh from Amman where he held separate talks with Jordan's King Abdullah II and Palestinian president Mahmud Abbas on Palestinian-Israeli unrest.

He first went into a meeting with Saudi Foreign Minister Adel al-Jubeir before heading out to Dhiraya Farm, the king's country residence.

Kerry thanked the king "for Saudi Arabia's support to multilateral efforts to pursue a political transition in Syria," Kirby said.

Washington and Riyadh are part of a US-led coalition that last year launched an air campaign targeting the ISIL armed group which controls swathes of territory in Syria and neighbouring Iraq.

The Saudi talks follow a meeting Friday in Vienna between Kerry and the foreign ministers of Russia, Turkey and Saudi Arabia on ways to end the Syria conflict.

But the Vienna talks failed to make any breakthrough and Kerry said at the time he hoped to reconvene another "broader" meeting on Syria as early as October 30.

Russia launched its own aerial campaign on September 30 in response to a request from Damascus.

Washington, Riyadh and Ankara back groups fighting the regime of Russia ally President Bashar al-Assad, while Moscow says it is targeting ISIL and other "terrorists" in Syria.