U.S., Turkey to step up plans for Syria's 'day after'

Clinton will meet with Turkey's prime minister and foreign minister and hold talks with Syrians who have recently joined the growing exodus of refugees fleeing the violence. 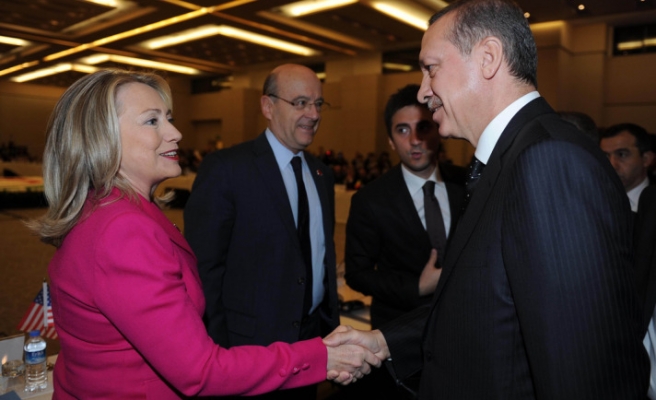 Clinton, winding up an 11-day Africa tour, is due to fly from the small West African state of Benin to Istanbul, where she will meet on Saturday with Turkey's prime minister and foreign minister and hold talks with Syrians who have recently joined the growing exodus of refugees fleeing the violence.

In Washington, the Treasury and State departments announced new sanctions on Syria's state-run oil company Sytrol, saying it had supplied gasoline to Iran, and on Lebanon-based Hezbollah, charging that the group had provided training, advice and extensive logistical support to Assad's government.

The sanctions will add to Washington's arsenal of economic measures targeting both Syrian organizations and foreign entities, mostly in Iran, accused of helping Assad's government.

While imposing economic pain on Damascus, the sanctions have not halted Assad's bloody crackdown on his opponents.

Rebels fighting Assad's forces in Aleppo said they were preparing a new attack on Friday after having been pushed back by government units seeking to reestablish control over Syria's largest city and its economic hub.

U.S. officials say Clinton's one-day stop in Istanbul will give the United States and its NATO partner Turkey a chance to compare notes on Syria following a string of dramatic swings in Assad's push to crush an armed rebellion.

Washington sees Turkey, one of Damascus' harshest critics, as the key player both in supporting Syria's opposition and in planning for what U.S. officials say is the inevitable collapse of the Assad government following some 17 months of bloodshed.

U.S. officials are particularly interested in Turkey's analysis of the political forces emerging as Syria spirals into chaos - hoping that together they can puzzle out the complex patchwork of rebel groups jockeying for position.

Clinton is due to meet a range of Syrian opposition figures in Turkey, but not members of armed fighting groups.

The day after Assad

Clinton and other U.S. officials have in recent weeks cited rebel gains on the battlefield and the defection of senior Syrian military and political figures, including Prime Minister Riyad Hijab, as signs that Assad's rule is crumbling.

They have also highlighted rebel claims to control a "corridor" from Aleppo to the Turkish border as a potential future opposition safe haven, which could present the United States and its allies with a policy predicament on whether to defend it against government attack.

"I do think we can begin talking about and planning for what happens next, the day after the regime does fall," Clinton said Tuesday, although she conceded it was impossible to predict how long Assad could hang on.

The U.S. official said Clinton's talks in Turkey would focus on the non-lethal aid that the United States is already providing, but would also look at unspecified additional measures that it might take to be more effective.

Clinton's trip to Istanbul comes less than a week after Turkey hosted the foreign minister of Iran, Assad's key regional ally, which is aligned with Russia and China in seeking to block western-led attempts to tighten the screws on Damascus.

Iran held its own international conference on Syria on Thursday, underscoring fears that the crisis could tip into an international proxy war and worsen sectarian tensions as Assad's minority Alawite government battles fighters drawn largely from Syria's Sunni majority.

Turkey this week accused Assad of supplying arms to Turkish Kurd militants, and P rime Minister Tayyip Erdogan has raised the possibility of military intervention in Syria if the Kurdish threat increases.

U.S. officials have so far ruled out direct military support for Syria's rebels, who are already believed to be getting weapons from U.S. allies in the Gulf.

But President Barack Obama has signed a secret order authorizing measures to help Assad's armed opponents, and U.S. of ficials s ay the United States is already collaborating with a secret command center operated by Turkey, Saudi Arabia and Qatar near the Syrian border to help direct vital military and communications support to rebel fighters.

U.S. officials said Clinton will also announce additional U.S. humanitarian aid and p lan with Turkey on how to handle the re fugee c risis created by Syria's violence.

Turkey has received more than 50,000 refugees from Syria, and the United Nations estimates that approximately 2 million people in Syria are in need of humanitarian assistance, and more than 140,000 people have fled to neighboring countries that also include Jordan, Lebanon, and Iraq.