Water, the new weapon in Syria 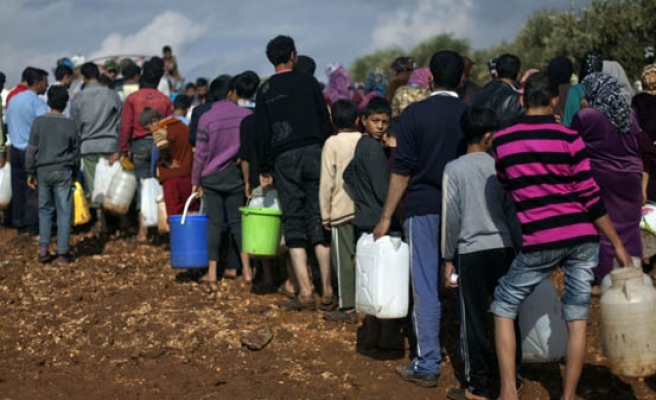 Syria's water network, heavily damaged by bombs and shelling, is at risk of collapse as its civil war drags on, increasing the threat of deadly typhoid or cholera outbreaks, the International Committee of the Red Cross said on Wednesday.

Millions of people in Aleppo and Damascus are cut off from water supplies for days at a time, a tactic used by all warring sides to exert control in divided cities, the ICRC said.

ICRC aid workers have helped water boards and engineers to maintain and repair ageing pumping stations throughout Syria since the conflict began in March 2011.

"But now with the problems of electricity and with the damage being sustained by them as a result of the conflict, there is the risk from here on that these big networks do begin to fail on a permanent basis, on an irreparable basis," Patrick Hamilton, ICRC operations coordinator for the Near and Middle East, told Reuters at ICRC headquarters.

"And over the next two years we will begin to see in cities like Aleppo potentially the rise of these big health epidemics that we haven't seen in this context until now - typhoid, cholera and so on," he said.

The water supply in Aleppo depends on the operation of pumping and electricity stations but each is controlled by different warring parties.

The operation of the stations is often used in a way to put pressure on the other side.

"Too often in Syria, water becomes a tool in the hands of fighting parties. It becomes a weapon of war. And it is civilians who suffer the most. Access to water should be unconditional," said Marianne Gasser, head of the ICRC delegation in Syria.

Despite a crippled health system, Syria's population has remained "comparatively healthy" due to access to clean water, but the failure of water supply networks would spell disaster.

"You'll end up getting huge epidemics which end up wiping out large segments of population," Hamilton said.

ISIL militants, whose stronghold is the eastern city of Raqqa, have stepped up offensives against government forces and other insurgents in Syria's north. "We have been able to send some materials to support water activities in areas under their control. A limited amount," Hamilton said.

Many of the two million residents in Aleppo, a major northern city, have "severe difficulty" in accessing water since pumping and electricity stations are controlled by different warring parties, the ICRC said in a statement.

The ICRC and engineers have restored 56 boreholes across Aleppo, Hamilton said. "We've been trying to alert the population through social media to the presence of these boreholes. We put out a map on Facebook and Twitter telling people in this place they can find clean water."

"All sides have pledge their commitment to try to ensure access to clean water to civilians on all sides," Hamilton said.