Anti-coup protesters staged Friday a wave of mass demonstrations nationwide against the bloody dispersal of two major protest camps in Cairo and Giza on Wednesday. 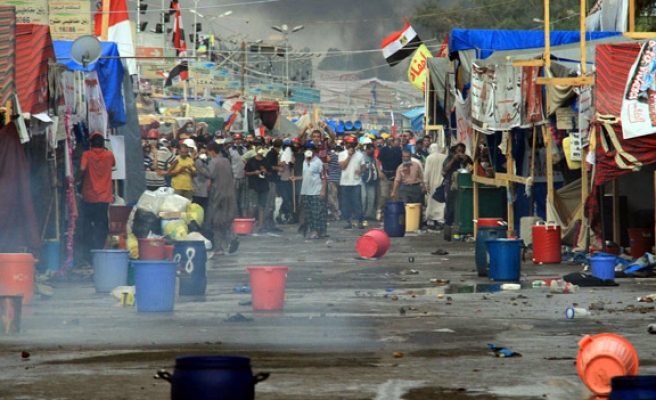 The National Alliance for the Defense of Legitimacy, a coalition of largely Islamist groups and figures that support ousted Egyptian President Mohamed Morsi, announced on Friday plans for a week of mass protests countrywide.

"We urge the Egyptian people to join peaceful protest throughout this week," the alliance said in a statement, calling it the "week of coup departure."

Many Western allies have denounced the killings, but Saudi Arabia threw its weight behind the army-backed government on Friday, denouncing its old foe the Muslim Brotherhood.

Automatic gunfire echoed around the capital throughout Friday afternoon, army helicopters swooped over the roof tops and at least one office block was set ablaze, lighting up the night sky long after the violence had subsided.

The Brotherhood announced a series of daily rallies over the next six days, starting on Saturday.

"We will not leave the squares. And we will not be silent over our rights, ever," said Cairo resident Abdullah Abdul Fattah, adding that he was not a Brotherhood voter.

"We are here because of our brothers who died," he said.

An interim cabinet, installed by the army after it removed Mursi during rallies against his often chaotic rule, has refused to back down. It has authorised police to use live ammunition to defend themselves and state installations.

Despite the Brotherhood emphasis of peaceful resistance, armed men were seen firing from the ranks of pro-Mursi supporters in Cairo on Friday. A security official said at least 24 policemen had died over the past 24 hours, and 15 police stations attacked.

The Brotherhood expressed that the gunmen had been planted by the security forces, saying it remained committed to non-violence.

Witnesses also accused Mursi backers of ransacking a Catholic church and setting fire to an Anglican church in the city of Malawi. The Brotherhood denies targeting churches.

Anti-coup protesters staged on Friday a wave of mass demonstrations nationwide against the bloody dispersal of two major protest camps in Cairo and Giza on Wednesday.

The alliance said many protesters are still in Ramses Square -- the scene of deadly clashes with security forces earlier in the day -- and would perform sunset and evening prayers in the mosque.

"They would then perform special prayers on the souls of those killed in the aggression by the coup plotters against the armless innocent protesters," it added, referring to the deadly dispersal of Rabaa al-Adawiya and Nahda protest camps on Wednesday.

The coalition thanks the thousands of Egyptians who took to the streets today braving "shelling and live ammunition firing from military helicopters."