Turkey has concerns over the PYD's historic links to the separatist PKK that fought on the Turkish side of the border. And pro-Western Syrian opposition groups accuse the PYD of having cooperated with Assad's government to take control of territory in 2012, which the Kurds deny. 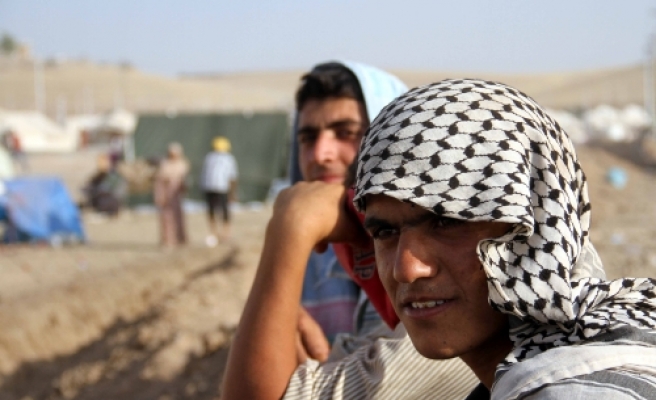 The fight against ISIL could at last win Syria's Kurds the Western help they have sought, but they must first clarify their relationship to President Bashar al-Assad and reassure Turkey that they won't cause trouble on its border.

The United States has entered the war against ISIL fighters in Iraq with air strikes, but is still trying to decide a strategy for fighting the group on the other side of the frontier in Syria.

In Iraq, Kurds are one of the main Western allies against ISIL. But in Syria, where Kurdish militia have carved out a swathe of northern territory and repeatedly battled against ISIL during a three-and-a-half year civil war, Kurds have yet to win the West's acceptance as partners.

The main Kurdish political party in Syria, the PYD, and its armed wing, the YPG, say they are obvious allies for Western states as the only force with a proven track record of combating ISIL there. The Kurds are dismissive of the moderate Syrian opposition that has been backed by the West but outgunned by radical groups.

But the West has so far kept Syria's Kurds at arm's length. NATO member Turkey has concerns over the PYD's historic links to the separatist PKK that fought on the Turkish side of the border. And pro-Western Syrian opposition groups accuse the PYD of having cooperated with Assad's government to take control of territory in 2012, which the Kurds deny.

Since ISIL overran the Iraqi city of Mosul in June, the PYD has been offered a chance to address both issues in a flurry of contacts with foreign officials, including some from "major powers", said Khaled Eissa, PYD representative in France. He declined to identify the countries involved, citing diplomatic protocol.

"They have given us signals that their position towards us is changing. But in my analysis - based on the contacts I mentioned - there are still obstacles," Eissa said by phone.

"They know the YPG are the most effective force against (ISIL). They want more assurances for the Turkish side," he said. "NATO states allied to Turkey must reassure it and make it understand that ISIL's existence is also a danger to Turkey and that the PYD does not wish ill on anyone."

A MEETING ON MOUNT SINJAR

The foreign contacts increased last month when ISIL fighters in Iraq besieged thousands of members of the ancient minority Yazidi sect atop a desert mountain, which U.S. President Barack Obama described as a potential genocide.

YPG fighters crossed into Iraq to help evacuate the Yazidis. That role improved the PYD's image, a Western official said.

"I don't anticipate a major change of policy, but I do anticipate greater dialogue with the PYD."

Redur Xelil, YPG spokesman, said the group had met U.S. military officials on the mountain, Mount Sinjar, to discuss the Yazidi evacuation. But apart from that, there had been no contacts between the armed group and the West, he said.

"We hope for strong cooperation with American or European states in the fight against ISIL - be it either in Syria or Iraq," he said, speaking by telephone.

Kurds live in Turkey, Iran, Iraq and Syria, and many have long dreamed of a state of their own. The closest they have come is in Iraq, where they rule an autonomous region that has managed to assuage concern from its neighbours and win support from the West.

The Kurds in Syria have received no such help in crucial battles against ISIL fighters, whose arsenals have become far more potent since June with weapons seized from the Iraqi and Syrian militaries.

In July, the YPG fought off a major ISIL attack on Kobani, a Kurdish city also known as Ain al-Arab that is important because of its location on the Turkish border. Kurdish fighters crossed into Syria from Turkey to help in the fight.

Ocalan Iso, a Kurdish military commander in Kobani, says YPG fighters are now taking the fight to ISIL in nearby areas used as operational bases.

The YPG has also been battling ISIL at the Iraqi border. It says 35 of its fighters were killed in a two-week battle for control of the village of Jazaa at the frontier. The YPG says it has killed hundreds of ISIL fighters.

ALEPPO - A TEST CASE FOR COOPERATION

Syrian Kurds worry that if ISIL fighters are driven from Iraq they will become an even bigger threat in Syria. "It won't be enough to bomb their positions in Iraq. If Obama or America bombs their positions in Syria, there must be coordination with the Kurdish forces," Iso said.

It is not yet clear what the United States will do about ISIL's foothold in Syria, where U.S. decision-making is complicated by its opposition to Assad. Western states that have backed the uprising against Assad have rebuffed the Syrian government's call for cooperation against ISIL.

Obama has authorised air surveillance over Syria, a decision that prompted speculation he was on the brink of ordering air strikes on the group there, but these do not appear imminent.

Part of his plan is to enhance support for moderate Sunni Arab groups, who are fighting against both Assad and ISIL. The Kurds say they are cooperating with the same groups, notably in a battle for territory north of Aleppo.

The Syrian Observatory for Human Rights, which monitors violence in the Syrian war, has recently recorded cooperation between Sunni Arab rebels and Kurds in the area, the organisation's founder Rami Abdulrahman said.

For such cooperation to take hold, the Syrian Kurds and moderate Sunni Arabs must shelve suspicions of each other's aims. Aleppo could be a test case. The ISIL's advance in territory north of the city is threatening supply lines for other Sunni Arab groups and also poses a risk for Kurdish interests in the town of Afrin and elsewhere.

Noah Bonsey, senior analyst on Syria at the International Crisis Group, said there was "potential value added" in military cooperation between the Kurds and moderate Sunni Arabs against ISIL.

"The most obvious test case for this is Aleppo because the stakes are very high for everyone involved," he said. "There are plenty of shared interests there, and there are some local relationships that exist. But those relationships would have to develop significantly to enable meaningful coordination."