Protesters converged on Al-Zebeiri Street, one of Yemen's largest streets, and are expected to march through several other roads 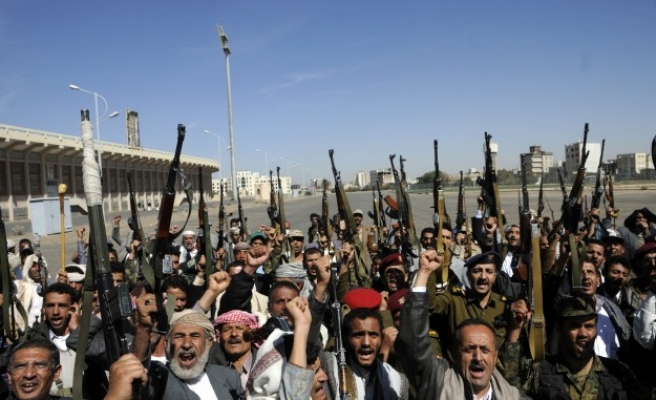 Thousands demonstrated Wednesday in Yemeni capital Sanaa to mark the anniversary of the uprising that toppled autocrat Ali Abdullah Saleh and to reject a recent government takeover by Shiite Houthi group.

Protesters converged on Al-Zebeiri Street, one of Yemen's largest streets, and are expected to march through several other roads, an Anadolu Agency correspondent said.

Houthi militants, who had blocked off several areas ahead of the protests, prevented photo-taking from the protests. One person was assaulted by Houthi gunmen for trying to film the demonstration, the AA reporter said.

The protests are set to mark four years since the eruption of the Yemeni uprising which started in February 2011 and eventually toppled Saleh in early 2012 after 33 years in power.

Eyewitnesses said that Houthi militants have blocked off central Sanaa's Taghyeer Square, the epicenter for the protests which led to Saleh's removal.

Several youth-led movements, including one led by renowned activist Tawakkol Karman, had called for mass demonstrations in Sanaa on Wednesday to commemorate the uprising.

Hussein Humaiqani, an adviser to Al-Bayda governor, was shot and injured by Houthi militants as he was participating in a protest to reject a recent government takeover by Shiite Houthi group, the witnesses added.

Following the shooting, the protesters marched to the hospital where Humaiqani was treated, chanting slogans against the Houthi group.

The British embassy in Sanaa has suspended its activities and urged U.K. citizens to leave Yemen immediately, citing security reasons.

"The security situation in Yemen has continued to deteriorate over recent days. Regrettably we now judge that our embassy staff and premises are at increased risk," the embassy statement quoted Minister for the Middle East Tobias Ellwood as saying.

"We have therefore decided to withdraw diplomatic staff and temporarily suspend the operations of the British Embassy in Sana’a. Our Ambassador and diplomatic staff have left Yemen this morning and will return to the U.K," he added.

The release said that British nationals who remain in Yemen should now contact the embassies of other European Union member states if they require urgent consular assistance.

"If you do choose to remain you should minimize movement around the country and within cities and towns and follow the other precautions in this travel advice," it added.

The embassy's closure comes hours after an announcement by the U.S. embassy in Sanaa to also suspend activities as of Wednesday, citing "terrorist activities and civil unrest."

The embassy urged U.S. citizens to leave Yemen immediately, fearing a violent escalation by demonstrations in the country.

The French embassy in Yemen also suspended its operations for "security reasons" on Wednesday shortly after their U.S. and U.K. counterparts both made similar announcements, according to a French embassy source.

"The French embassy has closed its doors for security reasons," the source, requesting anonymity, told The Anadolu Agency without elaborating.

The head of Yemen's Shiite Houthi movement, Abdel-Malek al-Houthi, launched a scathing attack on Tuesday on the country's Al-Islah party –described as an ideological offshoot of the Muslim Brotherhood – which he accused of adopting an "exclusionary approach."

"Al-Islah adopts an exclusionary approach, but it is still welcome to join the political process," al-Houthi said in a televised speech.

"The [Feb. 6] constitutional declaration is a crucial step that filled the power vacuum that was going to lead to chaos," al-Houthi said.

He added: "Yemen's political factions did not deal responsibly with the power vacuum; they didn't attempt to reach consensus or take the interests of the Yemeni people into account."

Meanwhile, six Yemeni parliamentary blocs – which account for 20 percent of the national assembly's lower house – expressed their rejection on Tuesday of a "constitutional declaration" issued on Friday by the Shiite Houthi group.

Among the parties represented in the six blocs are the Nasserist Unionist People's Organization, the Yemeni Socialist Party, the Al-Islah Party and the Justice and Building Party.

"The [Houthis' constitutional] declaration is an abortion of the political process that will deepen the country's political crisis, tear its social fabric and unity, and isolate Yemen regionally and internationally," the bloc said in a joint statement.

The bloc called on the powerful Houthi movement to "revoke its constitutional declaration in order to steer the homeland away from imminent disaster, the indications of which have become evident."

"We reject invitations to MPs to join the so-called national council," the bloc added, urging parliamentary leaders to convene "as soon as possible" to discuss the latest political developments.

Yemen's Houthis emerged as a formidable political and military force after assuming control of capital Sanaa last September. Since then, the group has moved on to establish control over other parts of the country as well.

This transitional council will then elect a five-member "presidential council" tasked with drawing up a government of "technocrats" and running the nation's affairs for a two-year transition period.

Last week's declaration, however, was rejected by most of Yemen's political forces – along with some neighboring countries – which described it as a "coup" against "constitutional legitimacy."

Fractious Yemen has remained in the throes of political turmoil since autocratic President Ali Abdullah Saleh stepped down in 2012 following a months-long popular uprising against his 33 years in power.