Western powers dropped calls for immediate sanctions against Syria at the UN Security Council in the face of veto threats from China and Russia. 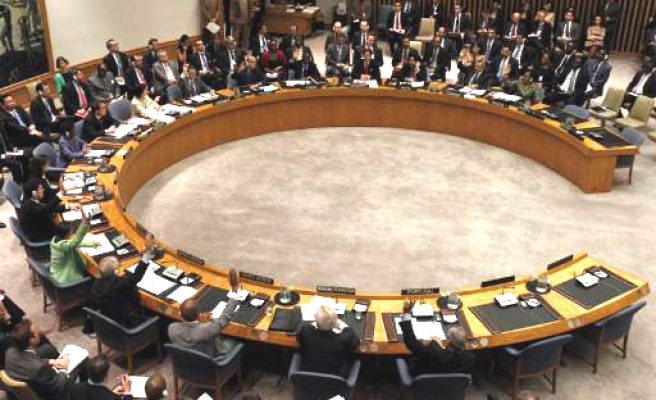 Western powers dropped calls for immediate sanctions against Syria at the UN Security Council in the face of veto threats from China and Russia.

The scaled-back resolution, which is aimed at breaking a deadlock on the U.N. Security Council, includes the threat of future sanctions if the government of President Bashar al-Assad does not halt military operations against civilians.

The resolution, if passed, would have the 15-nation council voice "grave concern" at the situation in Syria and demand "an immediate end to all violence."

If Damascus fails to heed the council's demands, the draft resolution, which was obtained by Reuters, says the Security Council would "adopt targeted measures, including sanctions."

Last month, the United States, Britain, France, Germany and Portugal circulated a draft resolution that called for sanctions against Assad, influential members of his family and close associates. They said at the time that they wanted a vote as soon as possible, but that vote never came.

"We want to send a strong and unified message to ensure that the Assad regime does not remain deaf to the demands of the international community," a European diplomat told Reuters on condition of anonymity.

"We want to get the council to approve something quickly," another diplomat said, adding that the new draft is "pretty threatening."

The second diplomat said the Europeans hoped to be able to get the council to approve the new draft resolution very soon, possibly within the next 24 hours.

Separately, Russian Foreign Minister Sergei Lavrov told the U.N. General Assembly on Tuesday that the BRICS, which U.S. and European diplomats say are becoming increasingly obstructionist, are not looking for fights but want multilateral solutions to urgent problems.

In New York, Chinese Foreign Minister Yang Jiechi urged the global community to "handle the Syrian issue in a prudent way so as to prevent further turbulence in Syria and its repercussions on regional peace."

China has joined Russia in opposing sanctions against Syria.

"We hope that parties in Syria will exercise restraint, avoid any form of violence or more bloodshed and conflict, and act quickly to ease tension," Uang added.

His speech followed a meeting with US Secretary of State Hillary Clinton, who urged China to back strong UN action on Syria, a senior US official said.