Women advance of protests in Egypt

"Of course the entire family had to come," she said, feeding one of her daughters. 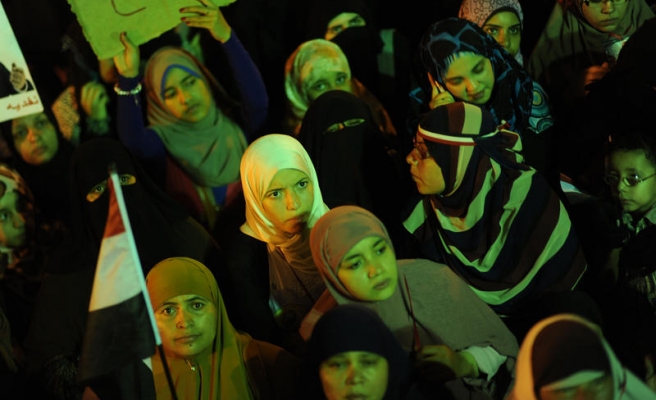 Whether in the ironic Tahrir Square where opponents of ousted President Mohammad Morsi are amassing or in Rabaa Al-Adawiya where his loyalists are camping, Egyptian women are the vanguards of the mass protests.

"Egyptians took to the streets to rescue this country after the Muslim Brotherhood split the people down the middle over political and religious ideologies," Samya Mahmoud, a housewife, told the Anadolu Agency in Tahrir.

She insisted that those staging a sit-in in Tahrir would not sacrifice what she described as the achievements of the second wave of the 2011 revolution.

Millions of disgruntled Egyptians flooded the streets in capital Cairo and nationwide on June 30 to demand the ouster of Morsi.

Three days later military chief and Defense Minister Abdel Fatah Sisi announced a roadmap for the future of Egypt, under which the constitution was suspended and the head of the constitutional court was sworn in as interim president.

"Those who think we will allow the return of Morsi are daydreaming," said the housewife defiantly. "Over our dead bodies.”

Amira, a young lady in her twenties, said women were as important to the revolution as men.

"Everybody has his/her share in the revolution and ousting Morsi whose regime failed to achieve the objectives of the revolution."

On the other end of the political spectrum, women in Rabaa Al-Adawiya were no less defiant.

"We are not backing down," said Aya Ahmed, a young wife who has joined the sit-in along with her husband and two daughters.

"Out Sisi, out. Morsi is our president," chanted a group of women nearby, all carrying their coffins.

"Of course the entire family had to come," she said, feeding one of her daughters.

Mrs. Ahmed said the women take turn in sleeping inside Rabaa Al-Adawiya because the place cannot accommodate all of them.

"I wake up with sunrise. I start by feeding my kids before I take my share of duty in cleaning the place and the square," she explained.

She added that speeches and activities in the square continue until midnight.

"Then we start to pray Qiyam prayer and supplicate to Allah to save our country until the Fajr prayer."

Standing shoulder to shoulder with the young girls in the square was an elderly woman in her late 60s.

"We oppose this coup against Morsi," she told the AA, refusing to give her name.

"We will not leave here until he is back to his office."