Earlier Friday, the army had advanced in Wadi Barada, taking the village of Baseema under heavy fire, the Observatory said. 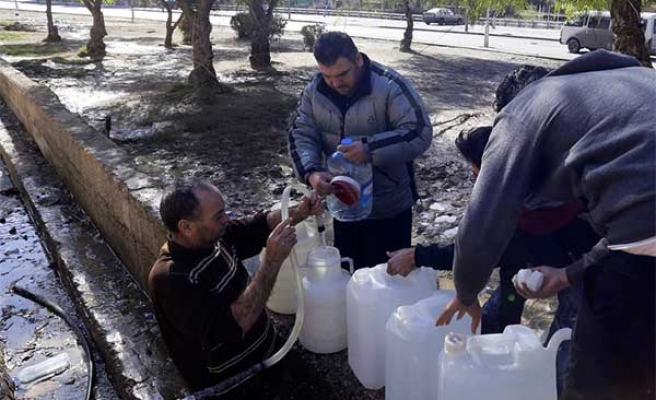 Syrian government workers entered a formerly rebel-held area near Damascus on Friday to begin restoring water to the capital after weeks of shortages, state media reported.

A local governor said a deal had been reached for the army to take control of the area northwest of the capital and work was underway to restore the water supply as soon as possible.

"We have halted military operations in Ain al-Fijeh and started reconciliation with the militas there," said provincial governor Alaa Ibrahim, speaking to reporters from an area near the spring.

"God willing, the pipe will be fixed within three days... rapid measures will be taken to get water to Damascus tomorrow," he added.

Ibrahim said that any rebel fighter in Wadi Barada willing to give up his weapon would do so, adding that those who refuse or belonging to former Al-Qaeda affiliate Fateh al-Sham would be offered passage to opposition-held Idlib province on buses arriving later Friday.

"All of Wadi Barada will be secured within hours," he added.

"Water will not be cut off to the city of Damascus again."

The Syrian Observatory for Human Rights, a Britain-based monitor, confirmed that repair crews had reached the Ain al-Fijeh spring and that the Syrian flag had been raised in the area.

The government has struck a series of deals with formerly opposition-held areas, often requiring rebels to hand over their weapons in return for a halt to fighting.

The opposition criticises this as a "starve or surrender" tactic, saying they are forced into deals by government sieges and heavy bombardment.

Government forces have battled rebels in Wadi Barada for weeks, and President Bashar al-Assad personally pledged that the area would be recaptured.

The government accuses rebels, including Fateh al-Sham, of deliberating cutting water to the capital.

But the opposition says pumping infrastructure was damaged in government strikes and denies Fateh al-Sham is present in the region.

The fighting has threatened a fragile nationwide truce brokered by regime ally Russia and rebel backer Turkey in place since December 30.