International community on Wednesday condemned the Egypt massacre which have claimed hundreds live. 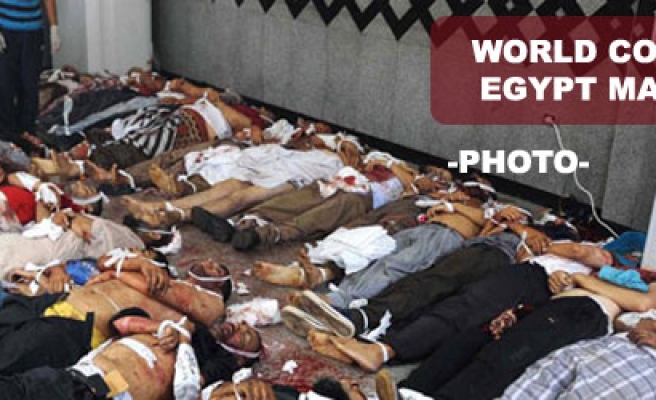 International community on Wednesday condemned the Egypt massacre which have claimed hundreds live. After the massacre, the first reactions were from Turkish political parties including main opposition party, CHP.

"This intervention revealed how the current administration's manner on transition to democracy. It is a worry for the peace of Egyptian people. It can clearly be seen that the international community has supported the military coup and encouraged the current administration for the attacks on Wednesday by remaining silent in front of the previous massacres instead of making a claim to democracy in Egypt and constitutional legality. The international community, especially UN Security Council and Arab League should start to move to stop that massacre." the prime minister's office said in a statement.

“We are very sad and concerned about these developments,” Faruk Logoglu, the deputy chairman of Turkey's main opposition Republican People's Party (CHP) said, calling on the international community to take action.

Britain on Wednesday led condemnation of Egypt's police after a deadly crackdown on supporters of ousted president Mohamed Morsi.

"I am deeply concerned at the escalating violence and unrest in Egypt," Foreign Secretary William Hague said in a statement.

"I condemn the use of force in clearing protests and call on the security forces to act with restraint."

Qatar, a main backer of the Muslim Brotherhood, slammed the use of force by Egyptian police as they tried to clear two protest camps set up in Cairo by supporters of Morsi.

"Qatar strongly denounces the means by which peaceful protesters in Rabaa al-Adawiya camp and Al-Nahda square have been dealt with and which led to the killing of several unarmed innocent people among them," a foreign ministry spokesman said in a statement published on the official QNA agency.

In a statement issued on Wednesday, the Iranian Ministry of Foreign Affairs condemned the “massacre of the people” in Egypt, while expressing “deep concern over the dire consequences” of the ongoing unrest in Egypt.

Warning against the “grave and dangerous consequences” and calling for an “immediate end” to the ongoing violence, the statement continued, “Undoubtedly, the ongoing trend of upheavals in Egypt strengthens the possibility of civil war in this large Islamic country. The continuation of the turmoil would be to the detriment of the 'civilized and history-making people' of Egypt."

"While the UN is still gathering precise information about today's events, it appears that hundreds of people were killed or wounded in clashes between security forces and demonstrators," Ban said in a statement.

Secretary-General previously renewed his call for all sides in Egypt to reconsider their actions in light of new political realities and the imperative to prevent further loss of life.

"The Secretary-General regrets that Egyptian authorities chose instead to use force to respond to the ongoing demonstrations," the statement said.

The White House condemned a violent crackdown on protesters in Egypt on Wednesday and strongly opposed the declaration of a state of emergency there made by Egypt's military leaders.

In a written statement by the NATO Secretary General on the events in Egypt, Anders Fogh Rasmussen said "I am deeply concerned by the situation in Egypt, and the continuing reports of bloodshed. I deplore the loss of life".

"Egypt is an important partner for NATO through the Mediterranean Dialogue. I call on all sides to exercise restraint and refrain from violence and to work to restore the political process," said Rasmussen.

The Secretary General of the Organization of Islamic Cooperation (OIC), Ekmeleddin Ihsanoglu in a written statement, called on all sides in Egypt for dialogue.

After Wednesday's police assault on civilians in Egypt in a violent move to disperse the two main pro-Morsi sit-ins in capital Cairo's Rabaa al-Adawiya Square and Giza's Nahda Square, Ihsanoglu warned that the stuation in Egypt may get worse.

The PJD said Egypt's interim government was "making repeated mistakes" and it called on Egyptian authorities "to stand by their people not to drag the nation into a quagmire."

The party described the crackdown as a "horrible massacre" and said "those who are committing crimes against humanity must be punished heavily."

The PJD urged the reinstatement of Egypt's first democratically elected president, Mohamed Morsi -- who was ousted in a Juy 3 military coup -- calling on Egyptian people to continue to voice their legitimate demands.