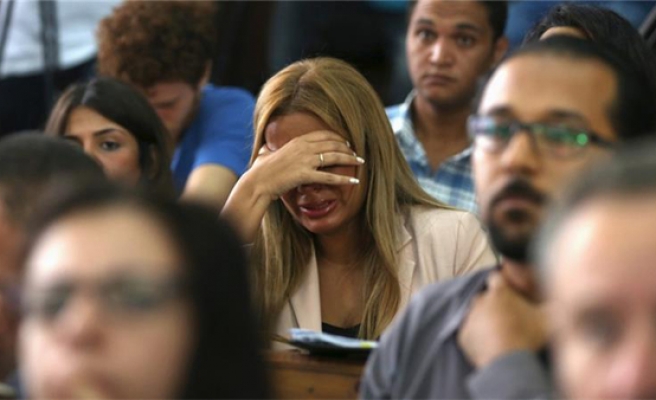 Al-Jazeera vowed Saturday to appeal an Egyptian court verdict to sentence three of its journalists to three years in prison, calling it a "deliberate attack on press freedom".

The Qatar-based broadcaster said it would appeal the "grotesque" verdict as soon as the Cairo court has explained its decision, and would also "intensify" its campaign to get its reporters freed.

At a press conference at its Doha headquarters, the network's head of litigation Farah Al Muftah said Al-Jazeera would not give up.

"At this point we are just waiting for the actual reasoned decision from the court to be released," she said.

"Once we have their reasoned decision, we will be in a place where we can actually appeal the court's decision to the court of cassation.

"Once that is released we will have 60 days to appeal at the court of cassation, which we intend to do."

Giles Trendle, acting managing director of Al-Jazeera English, said the company was "in a state of shock" but vowed to "look at relaunching, intensifying and escalating" the international campaign for the journalists' release.

"Today's verdict is yet another deliberate attack on press freedom," he said.

Saturday's decision came despite a worldwide campaign calling for the journalists' acquittal on charges of "spreading false news".

Australian journalist Peter Greste was tried in absentia after his deportation early this year.

At least three other co-defendants, accused of working with Al-Jazeera, received similar sentences.

The retrial was ordered after an appeals court overturned an initial sentence of seven years in prison, saying the prosecution had presented scant evidence.

Fahmy and Greste were arrested in December 2013, six months after Islamist president Mohamed Morsi was overthrown.

The three were accused of having supported the Brotherhood in their coverage. However, during the trial, the prosecution failed to find fault in their reporting.

After Saturday's decision, Al-Jazeera in a statement said the "whole case has been politicised and has not been conducted in a free and fair manner".

Relations between Egypt and Qatar remain tense, with Cairo accusing Doha of supporting the Brotherhood.

A spokesman for the UN High Commissioner for Human Rights, Prince Zeid bin Raad, said: "We are very disturbed by these three sentences and the extra pressure it creates on journalists in Egypt who are just trying to do their jobs.

Australia's Foreign Minister Julia Bishop said she was "dismayed by the decision", adding that she "will continue to pursue all diplomatic avenues" to clear Greste's name.

Amnesty International's director for the Middle East and North Africa, Philip Luther, condemned the " farcical verdict which strikes at the heart of freedom of expression in Egypt".

Reporters Without Borders, an organisation that campaigns for press freedom, said it was "appalled by the three-year sentences" and termed it a "disgraceful 'political' verdict..."