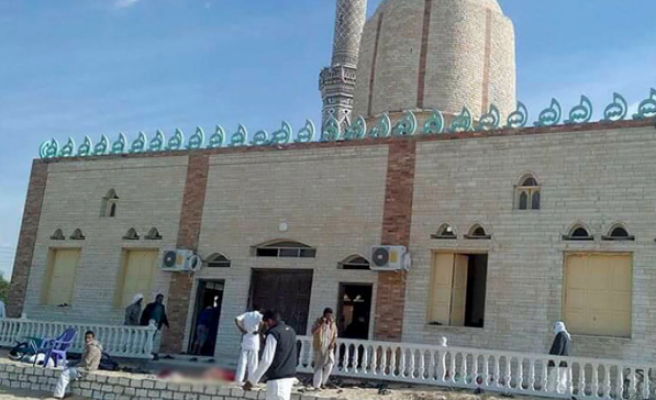 The deadly bombing Friday of a mosque in Egypt’s Sinai Peninsula, that killed at least 235 people, received significant condemnation from around the world.

Trump said, Washington stands by Egypt and backs its fight against terrorism, calling the incident “shocking,” the statement read.

Also on Friday, Trump condemned the "horrible and cowardly terrorist attack on innocent and defenseless worshipers" over Twitter.

"The world cannot tolerate terrorism,” he tweeted. “We must defeat them militarily and discredit the extremist ideology that forms the basis of their existence!"

Macron told Sisi, France is in full support of the Egyptian government, saying, “Paris is willing to increase cooperation with Egypt in combatting terrorism which became a global threat.”

The Turkish Foreign Ministry also strongly condemned the incident with a statement issued on its website.

"We strongly condemn the terrorist attack perpetrated today [Nov. 24] on a mosque located in the west of Al-Arish [northern Sinai], causing many casualties and wounded people," the statement said.

"We convey our condolences to the families and brotherly people of Egypt, and wish a speedy recovery to the wounded," it added.

Stella Kyriakides, the chairman of the Parliamentary Assembly of the Council of Europe, said in a statement: “We must stand firm against the threat of terrorism, which knows no borders.”

Russian President Vladimir Putin, for his part, offered his condolences to Sisi, according to a statement released by the Kremlin.

"We are once again convinced that terrorists are completely alien to the notion of human morality,” Putin asserted.

U.K. Prime Minister Theresa May, meanwhile, tweeted: "Appalled by the sickening attack on a mosque in North Sinai. Condolences to all those in Egypt affected by this evil and cowardly act."

The U.K. Foreign Minister Boris Johnson said on Twitter, “Deeply saddened by the abhorrent attack on a mosque in North Sinai, #Egypt. My sincere condolences to all those affected by such a barbaric act.”

French Foreign Minister Jean-Yves Le Drian also weighed in, saying: “I learned with horror of the ignoble attack that hit a mosque in the Northern Sinai, costing the lives of over a hundred worshippers during the Friday prayer.”

Speaking via Twitter, he added: “I send my condolences to the families, as well as to the authorities of the country.”

NATO Chief Jens Stoltenberg, also speaking via Twitter, said: "I condemn the barbaric terrorist attack on a mosque in North Sinai. My thoughts are with all those affected and the people of our partner, Egypt."

The Canadian Prime Minister, Justin Trudeau, issued a statement on the mosque attack in Egypt.

“I am shocked and horrified by today’s terrorist attack in the al-Rawda mosque in Bir-Al-Abed, which killed and injured hundreds of worshippers.

“On behalf of all Canadians, Sophie and I offer our deepest condolences to the friends and families of the victims of today’s attack. We hope for a complete and rapid recovery for all those injured,” he added.

"Canada condemned the attack and stands shoulder-to-shoulder with the people of Egypt in this difficult time."

Qatari Sheikh Tamim bin Hamad Al Thani expressed his "strong condemnation" of the attack, according to the press agency QNA. "We express our condolences to the families of the victims and to the Egyptian people, and we wish the injured a speedy recovery,” he said in the message to Sisi.

Kuwait also expressed its condolences to the “Egyptian President Abdel Fattah al-Sisi, his people, his government over “the heinous attack.”

According to the official Saudi News Agency, Saudi King Salman bin Abdulaziz offered condolences over the phone. He said his country stands by Egypt by all means.

For its part, the Bahraini Foreign Ministry confirmed Bahrain's solidarity with Egypt, saying, “We strongly condemn this terror crime which contradicts the principles of Islam and other religions, and humanity,” according to a statement released by the ministry.

Oman and Yemen were also part of the countries that expressed condolences to Egypt.

Condemning the attack, Tunisia called on the international community to set up anti-terror mechanisms in fighting terrorism affectively.

The Head of the Presidential Council of the Libyan Government of National Accord, Fayez al-Sarraj expressed condolences to the Egyptian government and people about the attack in a written statement.

Sudan and Jordan also denounced the attack, and confirmed their firm stand by the Egyptian people in fighting terrorism.

The Gaza-based Palestinian resistance movement Hamas also condemned the deadly bombing, which occurred not far from Egypt’s border with the Gaza Strip.

“Hamas condemns in the strongest terms the criminal bombing targeting worshipers at Al-Rawda Mosque in Sinai’s Bir al-Abd region,” the group said, going on to extend its condolences to the friends and families of the victims.

Hamas also called upon “God Almighty to protect Egypt -- and all Muslim countries -- from misfortune and provide them with safety and stability”.