Syrian singer Yahya Hawwa arrives in Istanbul to give a concert for Egypt under the slogan of "Sing for Egypt, There is a R4bia," on the anniversary of Egyptian revolution. 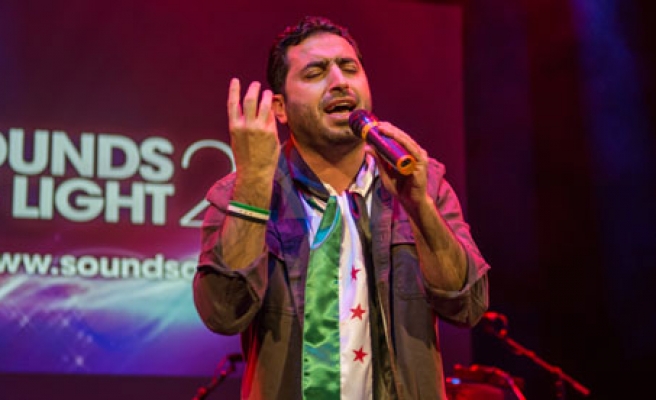 Since the Syrian uprising, many of the chants from the songs of 37-year-old Syrian singer Yahya Hawwa have been adopted by protestors. So much so that he has been dubbed singer of the Syrian revolution. His song entitled "traitor", a reference to the president earned him a death threat from the regime, which he heard about via his family in Syria.

Granting a brief interview to Anadolu Agency (AA) on his arrival in Istanbul to give a concert for Egypt under the slogan of "Sing for Egypt, there is a R4bia" (a reference to the four-finger rabia victory sign flashed across Egypt to remember the Rabaa al-Adawiya protest camp, which was dispersed in August 2013 in a military crackdown on demonstrators in support of former President Mohammed Morsi) Hawwa says he appreciates the Turkish government's support for the Egyptian people.

Hawwa was five when his father and uncle - who were market traders - were killed in front of his eyes in Hama, Syria in 1982. This was the term of Bashar al-Assad's father Hafez, whose forces are believed to have massacred around 40,000 citizens.

Their crime was that they had a brother who was a leader in the opposition Muslim Brotherhood, and an outspoken critic of the Syrian regime. After that he and his mother decided to move to Mecca, Saudi Arabia but what he lived through at a young age has shaped his life and music.

Syrian poet Saleem Abdul Qader encouraged him and Hawwa took up singing with his first album “Jinak” [We came to you]. Lebanese musician Khaled Janon and Jordanian musician Ayman Tayseer helped him in developing his skills in oriental music singing. He also learned fundamentals of Western music in the Hefny Institute in the Egyptian capital of Cairo.

Hawwa has released seven albums since 2002. He also produced Quran albums and Islamic vocal clips. He was imam of Al-Kaloti mosque - one of Amman biggest mosques while he was studying university in Amman. His songs mainly focus on human rights, human issues and political issues, faith, and spirituality.

"I am trying to use the music as a tool in order to develop the communities and youth all around the Middle East," Hawwa says.

With regards to the latest developments in his homeland, Hawwa stated that situation was terrible there but he was optimistic about the future of Syria noting,"I believe new generation of Syria will be able to rebuild Syria and to bring the justice and liberty for this country."