Yemen army fights in north and is attacked in south 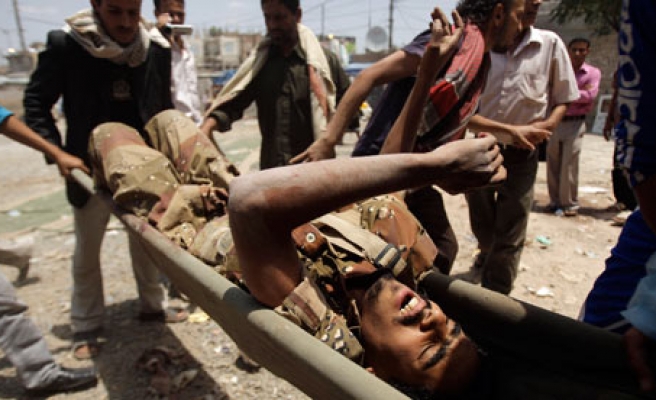 Clashes in the north Yemen town of Omran continued on Sunday between the army and fighters from the Houthi movement after at least 104 people were killed on Saturday, while in the south six soldiers were shot dead by al Qaeda militants.

Yemen's government is struggling to regain stability in a country facing a deadly uprising in the north, a separatist movement in the south and a growing al Qaeda insurgency that has survived repeated assaults by the military.

The conflict between the government and Houthis, who demand more rights for the Shi'ite Zaydi sect in the majority Sunni country, has taken on an increasingly sectarian tone leading to fears of further unrest.

The Houthis blame the end of a 12-day ceasefire across north Yemen on an advance in the al-Jouf Province northeast of the capital Sanaa by army units loyal to the Islah party, which has links to the Sunni Muslim Brotherhood.

The government said the advance on the town of al-Safra had been prompted by the failure of Houthi fighters to vacate positions in compliance with the terms of the ceasefire.

On Saturday Yemen's air force bombed Houthi positions in Omran, northwest of Sanaa, in fighting that killed 34 soldiers and 70 Houthis, who call themselves Ansarullah or "followers of God", medical sources in the city said on Sunday.

The attack by al Qaeda militants in Wadi Dhayka in the Mahfad district of the southern Abyan Province in a separate incident on Sunday morning killed six soldiers and injured two, local security officials said.

The district had been declared free of militants in April after a costly military campaign to clear al Qaeda from its strongholds in Abyan and the neighbouring province of Shabwa.