Saleh, who returned on Friday from Saudi Arabia, where he had been treated for severe burns, called for elections and a "peaceful exchange of power" in a televised speech on Sunday. 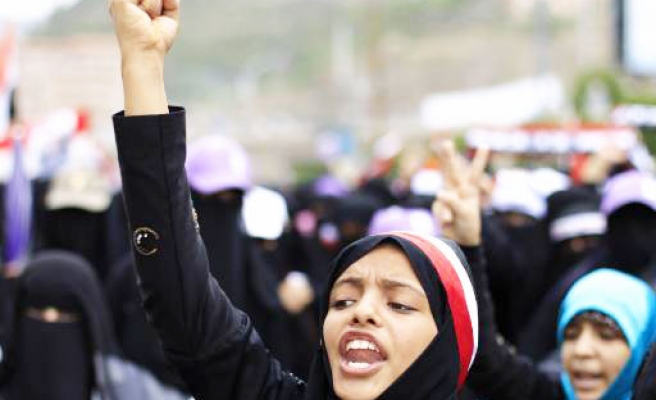 Protesters in Sanaa are preparing for a long, messy revolt after President Ali Abdullah Saleh offered no clear path to a handover on his return to Yemen from three months of convalescence after an attempt on his life.

Saleh, who returned on Friday from Saudi Arabia, where he had been treated for severe burns, called for elections and a "peaceful exchange of power" in a televised speech on Sunday.

But his failure to promise to step down fuelled more anger on Monday on the streets of Sanaa, where protests have raged since January.

"His speech was about creating chaos, not solutions. There was nothing there to solve this crisis," said Abdullah Magany, a high school biology teacher sitting in Change Square, the street encampment at the centre of the protest movement. "We need to keep escalating our protests."

Yet the mood in the square was subdued compared to the chaos of the past week, when about 100 people died in fighting between heavily armed loyalists and foes of Yemen's president of 33 years.

"There is a wary calm here and people aren't sure what to do next," said Rashad al-Sharayi, a soldier from the First Armoured Brigade, led by General Ali Mohsen, who defected and sided with the protesters in March.

"But he (Saleh) needs to have a deal signed fast ... there will be more clashes for sure because so far he isn't doing anything ... We were willing to sit here and defend protesters, but if he asks for war he'll get it," said Sharayi.

When protesters trying to expand the area of their ramshackle camp in "Change Square" marched onto government-controlled territory last week, they were caught up in fierce fighting between state troops and forces loyal to Ali Mohsen.

Yet hundreds of protesters marched to the square from all over Sanaa on Monday, including a group of at least 1,000 women with Yemeni flags fluttering above their black veils.

Fighting between military units appeared to be spreading beyond the capital on Monday as the defence ministry reported the death of a general, Abdullah al-Klibi, in an attack on a military base outside the city by pro-opposition tribesmen.

Three tribesmen were also killed during the offensive on the 63rd brigade in the mountainous region of Naham, in revenge for the killing of two fellow tribesmen on Sunday, a tribal source said, adding that warplanes had been bombarding the area.

"We are at war in Yemen. With all weapons in use. Every side is using everything it can use," said Ali Seif Hassan, a political analyst in Sanaa.

"It doesn't make me optimistic that he's come back. I don't see good things coming, from either side."

Negotiated ceasefires have broken down several times in Sanaa, dashing hopes that a pause in fighting would allow for talks on a transfer of power.

People on the streets have grown even more wary of Saleh's intentions since some 17 people were killed on Saturday when government forces attacked their camp in Sanaa, according to witnesses and medics.

Even so, some had hoped that Saleh would offer concessions in his speech after the escalating bloodshed.

"We marched today to let Saleh know we are angry at how he has returned," said schoolteacher Umm Anas, 32.

"I was so frustrated. I thought maybe after all of this death and fighting he would want to reach out with a real gesture of reconciliation. This just added insult to injury."