Yemen to face 'largest famine' if blockade not lifted 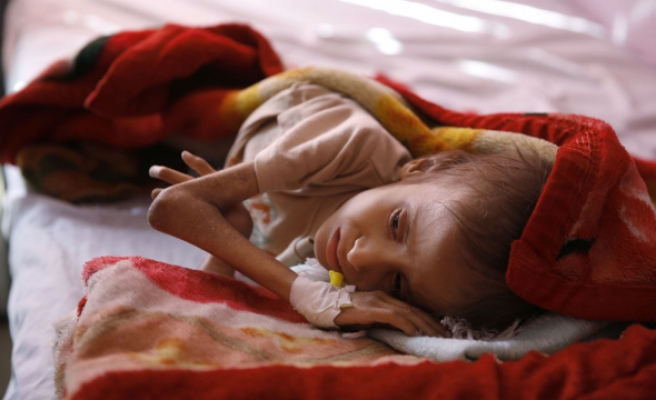 Yemen could face “the largest famine the world has seen for many decades, with millions of victims,” if the Saudi Arabia-led coalition does not lift a blockade on the war-torn country, a senior UN aid official said Wednesday.

Speaking to reporters after briefing the UN Security Council on the situation in Yemen behind closed doors, UN Under-Secretary-General for Humanitarian Affairs and Emergency Relief Coordinator Mark Lowcock warned the coalition about refusing to allow humanitarian aid to Yemen.

On Monday, in response to the weekend missile attack on Riyadh by Houthi rebels, Saudi Arabia decided to close all of Yemen's air and sea ports, stunting humanitarian relief operations in the country.

“A number of measures have been introduced recently by the coalition effectively closing air, sea and land access to Yemen,” Lowcock said.

“I have told the council that unless those measures are lifted […] there will be a famine in Yemen,” he added.

“It will not be like the famine that we saw in South Sudan earlier in the year where tens of thousands of people were affected.

"It will not be like the famine which cost 250,000 people their lives in Somalia in 2011. It will be the largest famine the world has seen for many decades, with millions of victims,” he added.

A Saudi-led offensive, which began in 2015, targeted pushing back Houthi advances but has been dogged by widespread allegations of international law violations.

Since March 2015, almost 5,300 civilians have been killed and close to 9,000 injured in Yemen’s war; the UN has warned that "the actual numbers were likely to be far higher".

“We condemn the outrageous missile attack on Riyadh over the weekend just as we condemn all attacks on civilians,” Lowcock added.