Hundreds fled from the southern end of the camp, they said, as the attack continued from midnight on Friday into Saturday. 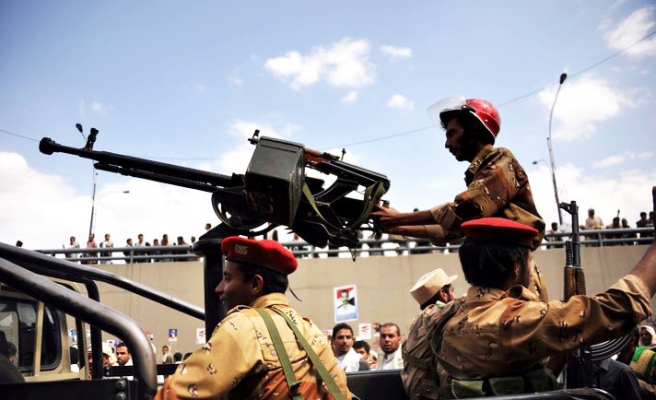 Government forces attacked an opposition protest camp in Sanaa overnight after President Ali Abdullah Saleh returned to Yemen from a three-month absence and at least 17 protesters and soldiers were killed, witnesses and protesters said on Saturday.

Hundreds fled from the midnight raid on the "Change Square" camp and mortar and sniper fire continued through the morning.

A Reuters correspondent saw flashes of light and loud explosions in the area, the heart of an uprising where thousands have camped for eight months calling for Saleh to quit power.

"They were striking all night up until now. We couldn't sleep because of the firing," said a protester who gave his name as Mohammad.

"The buildings around us were shaking. Look at the chaos that Saleh's return has already caused. These thugs were encouraged by his return."

Saleh, who went to neighbouring Saudi Arabia for medical treatment in June for wounds suffered in an assassination attempt, said he wanted a truce to end days of fighting in the capital. This would allow peace talks to take place, he said.

"I return to the nation carrying the dove of peace and the olive branch," Saleh was quoted as saying by state television.

He was also quoted by state news agency Saba calling for the capital of Sana'a to be cleared of "all armed elements" and for checkpoints and barriers to be removed.

At least six protesters have been killed since last night, according to a doctor at a mosque converted into a field hospital. Also killed were 11 soldiers from the First Armoured Division, led by General Ali Mohsen who defected and sided with protesters, according to a source in the generals' office.

"I was doing my night shift, and suddenly I heard all these explosions and I realized we must be getting shelled. The next minute, a mortar fell near me and exploded, I'm covered in shrapnel," said Yussuf al-Hamzy, 20, a soldier for Ali Mohsen who was guarding the square early Saturday morning.

"I think they're trying to go after us, the soldiers for the division. They want to push us out and centralise at the south end of Change Square and they need to get us to leave first," said Hamzy, his face covered with gashes from shrapnel wound, bloodied arm wrapped and bandaged.

Dozens of wounded streamed into makeshift clinics. Some of the bodies were badly mangled, a medic said.

"We have one killed in a terrible way by the mortar fire -- we only have half a body," doctor Mohammed al-Qubati said at a mosque converted into a field hospital.

Protesters in the opposition encampment on the 4-km stretch of avenue they have dubbed "Change Square" said some buildings and tents were on fire and that protesters had retreated by about half a kilometre.

Saleh's reappearance raised questions over the future of the Arabian Peninsula state, which has been rocked since January by protests against his 33-year rule.

In Washington, the Obama administration called for Saleh to hand over power and arrange for a presidential election by the end of the year.

"The Yemeni people have suffered enough and deserve a path towards a better future," U.S. spokesman Jay Carney said:

Protesters escalated their marches in Sanaa this week by entering territory controlled by state forces, triggering a battle between loyalist and pro-opposition troops. About 100 protesters were killed in five days of bloodshed.

Moments after the announcement of Saleh's return, Sanaa's streets erupted with bursts of gunfire and fireworks. But shelling rocked the capital's Hasaba district through the night in battles between pro-opposition and government forces.

Opponents saw Saleh's return as an attempt to rally for war and said they expected more bloodshed while his supporters reacted with joy and said he could restore order.

"I'm so excited," said Akram al-Aghbari, a doorman. "He is an honourable and great man. I know he's coming to stop this terrible violence. People here without him only know how to rule with weapons, but with him back, just you watch."

Abdulghani al-Iryani, a political analyst and co-founder of the Democratic Awakening Movement, said violence lay ahead.

"This is an ominous sign. Returning at a time like this probably signals he intends to use violence to resolve this. This is dangerous," Iryani said.

"His people will feel that they are in a stronger position and they will refuse to compromise. Basically this means the political process is dead in the water."

Many Yemenis thought they had seen the last of Saleh when he flew to Saudi Arabia for medical treatment after a bomb explosion at his palace left him with severe burns.

Saleh had been involved in negotiations mediated by six Gulf Cooperation Council (GCC) states -- Bahrain, Kuwait, Oman, Qatar, Saudi Arabia and the United Arab Emirates -- to leave office, repeatedly promising to step down only to change his position at the last minute.

"This initiative remains effective and Hadi will continue the dialogue to create a binding mechanism to implement the Gulf initiative," Yasser al-Yamani told al Jazeera television.

The foreign ministers of the GCC expressed concern about the situation during a meeting in New York on Friday, the United Arab Emirates' state news agency WAM reported.

The council condemned the use of private arms and heavy weapons against unarmed demonstrators and called for a ceasefire and an investigation into the bloodshed.

"I don't think the ceasefire will last, all these guys, these generals and sheikhs, they want to fight. It's greed for power. And that's not what the people want, they wanted change, they want a new Yemen," said one elderly man.