Responding to a call for "civil disobedience" by the group's leadership, Houthis set up tents outside the headquarters of the electricity and communications ministries as well as the main post office 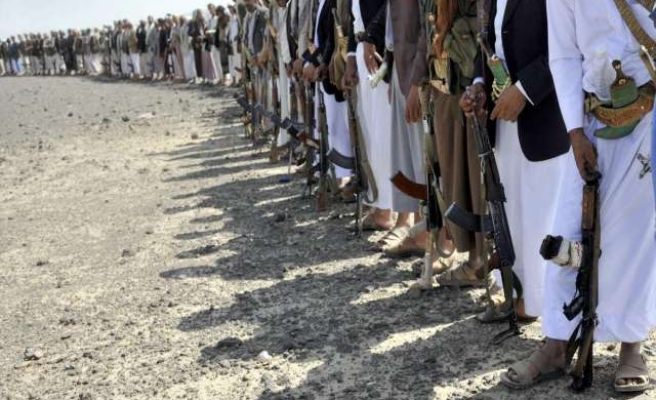 Warplanes also bombed armed Houthi rebels in al-Jawf province, killing 13 of them, according to government sources.

Tens of thousands of Houthis have spent weeks camping around Sanaa in protest at the government against which they have fought, on and off, for a decade in northwest Yemen.

Responding to a call for "civil disobedience" by the group's leadership, Houthis set up tents outside the headquarters of the electricity and communications ministries as well as the main post office, all located on the road leading to Sanaa Airport.

The government's use of tear gas is the most decisive response to the protesters since the recent unrest began. Houthi representatives said several protesters had suffered from tear gas inhalation.

Fighting has been going on intermittently for months in the north between the Houthis, who carry the name of their leaders' clan, and Sanaa-backed tribes, but the government had paused air strikes to give truce talks a chance.

The Houthis, who follow the small Zaidi branch of Shi'ite Islam, first launched their uprising against the central government in Sunni-dominated Yemen in 2004, and fought several bitter wars against it in the years that followed.

"We hold the government responsible for the repercussions of its aggression, and we emphasise our people's right to self-defence by all means if it persists in its aggression," Houthi spokesman Mohammed Abdul Salam said in a statement on Sunday.

Attempts to involve the Houthis in mainstream politics in the aftermath of the 2011 Arab Spring protests and the ousting of Yemen's long-time Ali Abdullah Saleh, an arch-enemy of the Houthis, have failed, and the group has returned to its more radical and isolationist ways.

The Houthis, who say they want to topple the government, have centred their current protest on a call for recent fuel price rises to be reversed. They rejected a broad compromise proposal on fuel subsidies made by President Abd Rabbu Mansour Hadi last week.

Iran's Foreign Ministry denied a suggestion by Hadi that Iran was helping to incite the turmoil. It said Iran "backs peaceful attempts to realise legislative aspirations ... (and) participation of all groups in the political process".

The Yemeni government and Iran's rivals among the Sunni-ruled Gulf states have long accused Shi'ite Iran of interfering in Yemen, something that Tehran and the Houthis deny.

"Some do not wish security, stability and an exit from the crisis for Sanaa, but want to light a fire like in Damascus, Baghdad and Libya," Hadi told tribal leaders on Saturday.

The state news agency Saba said he had urged Iran to "exercise reason and logic in dealing with the Yemeni people, and .. deal with (all) the people and not just one class, group or sect".

The president wants the Houthis to join a new unity government and announced fuel price cuts of about 30 percent last week.

The rebels rejected his compromise plan as "meaningless", and a national consensus government dismissed last week remains in place pending progress in the truce talks.