Yemenis mourn death of protester by Houthis in Ibb

Thousands participated in the funeral procession. 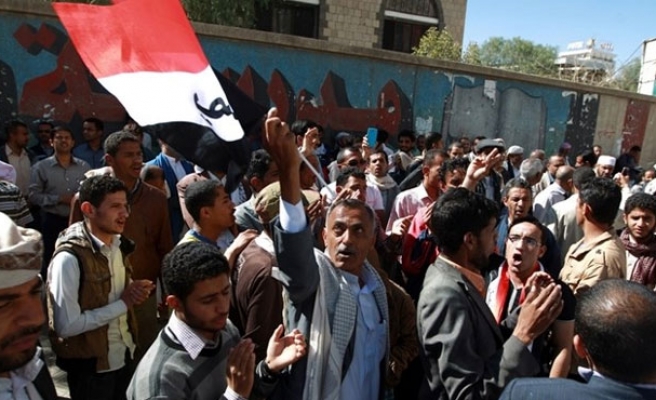 World Bulletin / News Desk
Thousands of Yemenis on Monday participated in a funeral procession for an activist who was shot dead by Shiite Houthi militants two days earlier in the central Ibb province.

Thousands participated in the funeral procession for Nasr al-Shojaa, who was killed on Saturday by Houthi militants who forcibly dispersed a protest in the city of Ibb, eyewitnesses told The Anadolu Agency.

Demonstrators marched through the streets of Ibb city to denounce the presence of Houthi militants in Ibb province, before the slain activists' body was transferred to a nearby village for burial.

Marchers also affirmed their support for the legitimacy of President Abd Rabbuh Mansour Hadi, noting that capital Sanaa had been "occupied" by Houthis. Some called for the transfer of the capital to the city of Aden.

On Saturday, a security source told AA that Houthi militants had opened fire on a demonstration in Ibb city, killing one protester and leaving six others wounded.

Demonstrators had hit the streets to condemn what they described as the Houthis' "coup" and demand the departure of Houthi militants from Ibb.

Hadi, who had been under house arrest by the Shiite militant group, fled Sanaa on Saturday to the southern city of Aden.

The president tendered his resignation to parliament last month after the Houthis seized control of Sanaa's presidential compound amid clashes with presidential guards.

Parliament, however, has yet to convene to accept or reject his resignation.

The Houthi group seized control of capital Sanaa last September and has since sought to expand its influence to other parts of the country.