Other Yemeni officials may have looted public funds, but former president Ali Abdullah Saleh says he was not one of them and he has challenged his authorities to find one dollar acquired inappropriately and hold him to account. 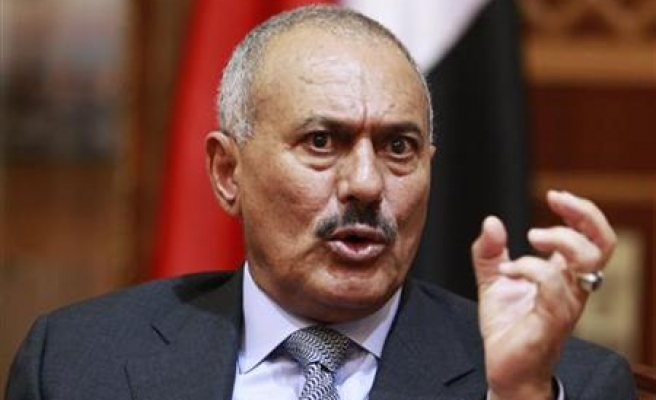 His critics in Yemen, an impoverished country of 25 million where 40 percent of the population live on less than $2 per day, accuse him of embezzling billions of dollars during his 33 years in power.

Others say it is clear the veteran former president still wields immense informal power in Yemen's turbulent politics, and speculate this stems in part from access to significant wealth.

Not so, Saleh told Reuters.

Seated on a plush couch in a tent in the garden of his mansion in the capital Sanaa, Saleh, a sprightly 72, challenged anyone to find evidence of wrongdoing during a recent interview.

"I had a (finance ministry) and a central bank. Let them produce one dinar Ali Abdullah withdrew and judge him," said Saleh, appearing relaxed and confident and dressed in a sharp plaid black and grey suit jacket and a striped tie.

Any suggestion he stole, he says, is part of a campaign to denigrate him by what he terms the 'failed' administration now at the helm of the Arabian peninsula state, the second poorest Arab country after Mauritania.

Saleh is unique among the leaders who lost power during Arab Spring uprisings by remaining at liberty in his country, thanks to a deal brokered by the United States and Gulf Arab countries following mass protests against his rule.

The demonstrations, which were part of the Arab Spring uprisings, were demanding democratic and economic reforms.

Not for Saleh, however, the indignity of exile or the high profile prosecutions suffered by his fellow former Arab leaders.

But one thing he has in common with his former presidents is that he is the target of accusations of grand corruption.

The resolution left the imposition of asset freezes and travel bans on specific individuals to a newly created U.N. sanctions committee for Yemen, which will be made up of all 15 council members.

He said he would cooperate with the Security Council in the "right manner" but that the world body should not "act as a policeman".

"It's a media circus and a besmirching of the former regime that achieved unity and democracy ... because this is a failed government so it is hanging its mistakes on others," he said.

"What have they achieved in the past three years? This is a question. They are living on the achievements of past years."

Yemen, a U.S. ally, remains in poor shape, and analysts say its efforts to stabilise and move forward smoothly with a post-Saleh political transition remain vulnerable.

Problems include a stubborn al Qaeda, a conflict with secessionists in the south and Shi'ite Houthi fighters in north, as well as endemic corruption and poor governance.

Estimates vary widely on the amount of money Saleh is accused of hiding.

Prominent political scientist Abdulghani Iryani said he expected it to be "in the billions," thanks in part to a long entrenched system of patronage in the civil service.

Under Saleh's tenure, Yemen's civil services grew massively bloated, and poverty grew. While the World Food Programme has said that nearly half of Yemen's population is growing hungry, the Arabian Peninsula country also boasts some millionaires.

The Security Council has previously expressed concern over reports of interference by Saleh and al-Beidh. In November, the U.N.'s Special Envoy Jamal Benomar accused members of Saleh's circle of obstructing reconciliation talks in Yemen aimed at completing a power transfer deal that eased Saleh out of office.

At the time, a Saleh aide denied his camp was undermining the talks.

Saleh survived an assassination attempt during an attack on the presidential palace in June 2011 and was flown immediately to Saudi Arabia where he underwent several surgeries to treat his wounds, which included severe burns.

The veteran leader said he was not looking to return to power in a future election, as some people close to him have hinted in the past.

In Yemen, social media has been awash with pictures heralding Saleh's son, Ahmed, the former head of the republican guard and now ambassador to the United Arab Emirates, fuelling suspicions the leader's son could run in a future election.

Asked whether he thought his sons should run, Saleh said:

"They have the right as citizens ... I would not stop him, but I wouldn't recommend at this time that he become a candidate when the state is in disarray.