212 Reunion and the Future of Indonesia 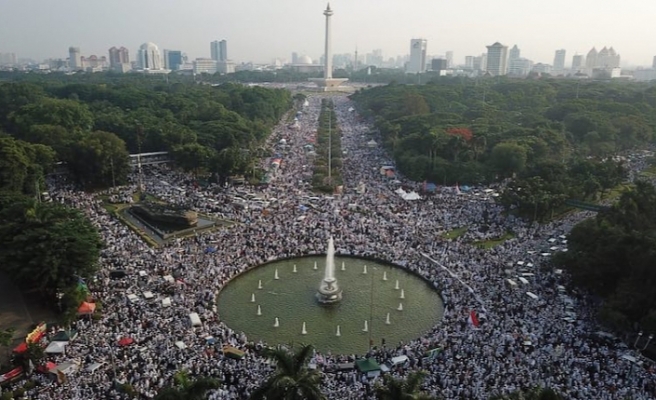 The reunion of Indonesian people on Sunday, 2 December 2018 turn out attracted more than one million people. Assembled at the National Monument square at the Centre of capital city of Jakarta, this meeting –dubbed as 212 Reunion in National Monument (MONAS)- filled not only the massive  square but also spilled kilometers away into the Patung Tani square,another square dedicated for the struggle of Indonesian independence. At the time when many of Indonesian establishment derided the massive rally as a meeting of radical or unnecessary meeting since current Indonesian situation is different from the time of former Jakarta governor Basuki Tjahaja Purnama (Ahok) who was openly attracting controversies. Indonesian media establishment almost unanimously shunned the event and its supporters or claim the meeting is organized and attended by fringe people at the fringe end of the political spectrum, and at the time when many obstacles were put in place by the government –buses and vehicles carrying participants toward Jakarta were intimidated and people urged not to attend the reunion- the attendance of up to one million people from all walk of life, coming from as far as Makassar(located in an island thousands of kilometers away from Jakarta) shows that far from either fringe or small, this 212 reunion has transformed into a movement capable of changing Indonesia’s future. The movement not only stopped the liberal and leftists coming to power alongside Ahok in Jakarta Governer election, but also pose a challenge to the reelection of incumbent President Jokowi in coming parliamentary and presidential election.

The so-called liberals currently ruling in Indonesia through Jokowi administration have everything in their power like the colonial Dutch rulers and their local collaborators to stop any movement from ascending to challenge Jokowi’s so-called Revolusi Mental. Similarly the way Indonesian people choose to gather in tens of thousands in Lapangan Ikada to show the world that Dutch’s colonial rule was unacceptable and the true majority of Indonesians were against the Dutch maintaining their power. Millions of people defied the administration’s narrative to come to this 212 reunion, a rally filled with assertion that, while apolitical in nature, Indonesia’s situation cannot remain the same. Many speakers on the stage were, for the first time in Jokowi Administration’s history, openly mentioned the current state of Indonesia. And the fact that not only Islam-friendly but even certain non-Muslims also come to the event prove further that many people want this event to become a  momentum for the majority of Indonesian people to change the way things currently are happening in Indonesia.

The reuinon of 212 in itself proven correct that the current administration is behaving like the Dutch in their twilight years of their rule. Similar like the Dutch who often belittle Indonesian independence movement, government supporters tried hard to prevent the reunion taking place, making fuzz about the true number of attendants of the event, or tried to confuse people on the true purpose of the event. Even when they have the so-called elites supporting them against poorly equipped opposition.

Indonesia is currently experiencing downgrades in all section of life. Inter-religious relationship started getting worsened, with Jokowi supporters trying to portray Muslims as a threat to minority communities to shore up support strong minority groups. Intra-religious tensions are also widened, with Jokowi-backed Nahdlatul Ulama (NU) trying to imposed their version of Islam upon the general Muslim populace in return to their support for the president. There are worsening economic situation throughout Indonesia, with economic growth that only benefitted the upper class of the populace. This is evident in the widening of real Gini coefficient and the decrease in real-permanent employment rate. Purchasing power, although increasing on paper, is actually decreasing in reality. In terms of press freedom, it is common knowledge that the media editors are under the thumbs of government supporters. No real criticism of the president ever aired, on the contrary, criticism of the president’s opponents is the common staple of the media, not unlike in the era of Dutch colonialism where established media often forced to air the establishment’s narrative. Management of social media platforms such as twitter, line and YouTube are commonly known to have been infiltrated by government supporters; research found algorithm have play in their favor, even in YouTube contents supportive of the current administration would appear on every user’s feed. Appointments of state officials, never based on meritocracy in Indonesian history, are even shadier in his administration. The appointment of Chief of the Army Branch is an example; of all capable officers in the army, it is the son-in-law of Hendropriyono, the veteran head of Army Intelligence Bureau (BAIS) and also the chief clique behind few army veterans who supported president Jokowi, appointed as the new Chief. Some may argue that he got the position by way of capability, however, there are 2 senior officer batches above him could have selected as a new chief; instead, he bypassed all those senior batches to appoint the son-in-law of his supporters. Building construction, seldom fulfill feasibility standards at all levels, is worsened by the way his administration arranged the funding source mainly sourced from Chinese-linked funds, with long-term unfavorable terms for Indonesia blamed on backroom deals favoring the president’s supporters.

To put cherry on top, most Indonesian public figures are refraining themselves from criticizing the president, few eventually join him, while few got prosecuted on trumpeted charges. And those who dare to speak up are the ones who led the 212 movement, with repeat rally this year urged the people to come in drove into the reunion. Considering the response people given, against all odds. It is not embellishing that the 212 reunion will play a crucial role in ushering the social and political change in Indonesia especially when parliamentary and presidential elections are due in early next year. It serves as an energizer for up to a million people who gathered in Jakarta on 2 December 2018 (2-12) to be an agent of change.