42 years of Monufian rule in Egypt

Located at the center of the Nile Delta, the governate of Monufia has produced nearly all of Egypt's leaders and senior officials since 1952, including former presidents Anwar Sadat and Hosni Mubarak as well as today's interim leaders General Abdal-Fattah al-Sisi and Adly Mansour. 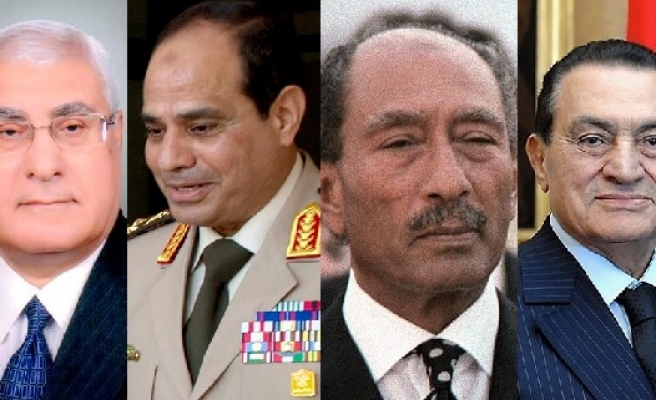 After King Farouk was dethroned in the 1952 Egyptian Revolution, the leadership of Egypt was handed to the people of Monufia, who subsequently ruled Egypt for 42 years afterwards. They became active in the time of Egypt's second president, Gamal Abdel Nassar, and also during the time of the third president Anwar Sadat, who was elected in 1970 and was also a close aid of Nasser.

Located at the center of the Nile Delta, the governate of Monufia is considered to be of great strategic importance for the state. As a farming community with limited sources of income, the people of Monufia gave much value to trade and education, raising government officials who would work to raise their living standards. For this reason, the education system of Monufia has been kept at a high standard, with the Monufia Faculty of Medicine achieving even better results than that of Cairo University. The students of Monufia are almost always in the top three for exam results across all subjects.

The people of Monufia today boast of successful careers in the police force, intelligence services, army, media and academic institutions, contributing greatly to the Egyptian state for over four decades. From September 1970 when Anwar Sadat came to power till February 2011 when Hosni Mubarak was toppled, the presidency of the state was split between these two sons of Monufia. One and a half years of military rule afterwards was also managed by Monufians.

Following Mubarak's resignation, military general Mohamed Hussein Tantawi took control. In this year an a half period, two interim governments were put in charge. First Islam Sharaf governed the country from March 2011 till his resignation in November 2011, then Kemal Genzuri took charge until August 2012. Both of these men were from Monufia. It was only for the one year that the elected president Mohamed Morsi was in power that Monufians weren't in the top spot.

However, there was one exception. Even in Morsi's short reign as president, one of his most important aids was from Monufia, who also happened to be the very same man who played one of the most important roles in ending Morsi's reign. That man was none other than his Chief of Staff and Defense Minister General Abdel-Fattah al-Sisi. On June 30, the day that the protests against Morsi first started, a certain Adly Mansour became the head of the supreme constitutional court. A day after the July 3 intervention, Adly Mansour became the interim president of Egypt. Funnily enough, Adly Mansour is also from Monufia.

Even in Morsi's short reign as president, his prime minister "Hisham Qandil" was menofian :]

The curruent Chief of Staff Seddiqi Subhi is MenoufianThe succecful interior trade ex-minister upon Morsi era is Dr.Basem Auda and he is Menoufianalso, the Brotherhood member of leadership and ex-minister Dr. Mohamed Ali Besher the only one out of JAIL now is Menoufian.and the list is very long

not Islam Sharaf it is Issam Sharafthank you ahmed egypt

Indeed no such thing in Egypt, i would rather call it "Egyptian rule", as long as the country is run by an Egyptian President, no matter the governorate he comes from.

Ur article is very interesting, as I, myself is half monufeyan. But please allow me to correct some info in it:1- Prime minister name is ESSAM Saraf. 2- Abdel Fattah el Sisi didn't lead a COUP, it was a REVOLUTION with 33 million egyptians in the streets. 3- It was not El Sisi who appointed the head of the supreme court, but the constitution was simply applied. Thank you again for article