The celebration seemed rather to celebrate Al-Sisi as Egypt's (as well as the Arab's) new hero and commemorate him for ousting the first elected Egyptian President Mohamed Morsi and crushing the Muslim Brotherhood movement.... 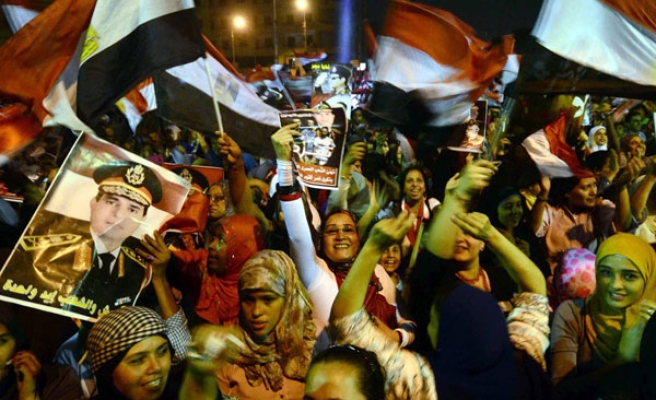 It has been a tradition to celebrate the national holiday and commemorate the 6th October war, known in Israel as Yom Kippur war in Israel. Despite the Egyptian economy crisis that has reached a critical stage, the country witnessed an extravagant concert to celebrate the anniversary of the Egyptian army's surprise attack on Israel, which resulted in the recovery of the Sinai Peninsula by a Peace treaty later in 1979.

While crowd was cheering and pop stars from Egypt, Lebanon and the Gulf were singing anthems to the army in a military-run stadium in Cairo, Muslim Brotherhood supporters were dying under heavy gunfire across the country. The discharge of tear-gas cannons and the crackle of gunfire echoed through the streets of Cairo leaving more than 50 people dead and more than 200 injured marking this day as deadliest day in Egypt since the violent breakup of the Muslim Brotherhood’s protest.

The military and its supporters, on the other hand, were secured to celebrate freely in the capital’s Tahrir Square with patriotic dance and musical performances. A spokesman for Egypt’s presidency said Saturday that anyone protesting the military on Oct. 6 would be considered a foreign agent. This reveals that any assembly in support or in favour of the military will be secured and welcomed by the government, whereas any demonstration against the military will be punished severely.

The celebration seemed rather to celebrate Al-Sisi as Egypt's (as well as the Arab's) new hero and commemorate him for ousting the first elected Egyptian President Mohamed Morsi and crushing the Muslim Brotherhood movement. As Emirati, Iraqi, Bahraini, Moroccan and Jordanian defence ministers attended the celebration, Al-Sisi's speech stressed the unification of all Arabs. Military chief General Abdel-Fattah al-Sisi - who emerged himself as a national hero for engineering a military coup – attempted to win the mob by his sentimental speeches. He is believed to be bringing back the image of the charismatic leader Gamal Abdul Nasser, who had also imprisoned and tortured the Muslim Brotherhood and executed the Islamic leader, Sayyed Qutb. The 58-year-old General, who already owns power, received a tidal wave of petitions for him to run for the presidency.

Al-Sisi pledged to "protect people", but many people started to ask what is he protecting people from? In the last few months, there were mass demonstrations across the country but no suicidal bombings and terroristic attacks were carried out as was propagated by the Muslim Brotherhood's opposition. Is Al-Sisi protecting people from the threat of peaceful demonstrations?

It is true that the Islamist media channels had incited hate speech during Morsi's regime, however, since the disperse of the sit-ins in Rabaa and Nahada no acts of terrorism have been witnessed in the cities. In addition, the burning of the churches that took place right after the disperse of Rabaa and Nahda sit-ins still raises questions about the incomprehensible inaction of the police forces to protect those churches. Investigations were neglected and until now there has been no explanation for the sudden absence of the security guards who were constantly posted outside churches as a security measure.

The deadly clashes indicate that the political unrest will not fade away. At the end of his speech, Al-Sisi thanked the army and police for their "sacrifices", asking them to continue their "noble mission". Nonetheless, the police's mission for the last few months was to arbitrarily arrest and shoot protesters, and torture prisoners. Al-Sisi confirmed in his speech that he acts upon the will of the people. Thus, no one can stop the acts of 'ethnic cleansing' against the Muslim Brotherhood as the people have given 'mandate' to the military.